If you're explaining, you're losing 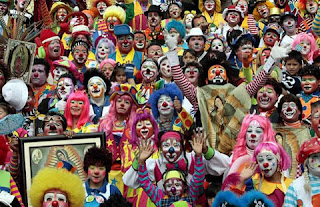 *you see the problem with how one shouldn't be entertained by this sort of thing.

Via Dave Weigel, why the 21 members of the House GOP aren't really refusing to vote to pass a clean CR:

So: New Jersey Rep. Frank LoBiondo has been quoted saying he'd back "whatever gets a successful conclusion," including a clean continuing resolution. Today, when I asked why he voted against the Democrats' "previous question" gambit, he shook his head and told me to "get your rules straight—that was appealing the ruling of the chair." Were there enough votes for a clean CR? "I'm not the one to ask," he said.


Virginia Rep. Scott Rigell, who has been cited many, many times as a Republican willing to bend, agreed with LoBiondo on procedure. "There really was a genuine debate about the rule, and whether the rule itself was germane," he said. "It wasn't a motion to recommit. I wouldn't violate what I thought were the rules of the House to advance an agenda."
....
"You have to call Cruz," said California Rep. Devin Nunes, who's been calling for a clean CR for days, when a reporter asked him about the party's next moves. "I'm not even joking about that. He's the one that set up the strategy. He's the one that got us into this mess."

If it weren't hurting so many decent people, from employees to recipients of aid, this would be entertaining.

To the extent it is proving how much the American people hate the federal government and want to shrink it to a size they can drown in a bathtub, it IS entertaining!

Now if we could just get a hurricane to hit Tennessee so we could hear Marsha Blackburn talk about how her state doesn't need federal aid.....*

And on the subject of Weigel, just read this.  It almost makes Culberson sound coherent.