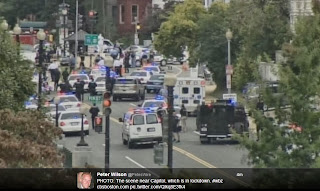 This is not the blog for breaking news, but at this moment there is an investigation of shots being fired near the U.S. Capitol, and some reports (which hopefully prove not to be true) are that one officer is down.

It bears repeating that, while the Capitol Police may be "essential personnel," that doesn't mean they are currently being paid for keeping the people in the Capitol safe.

Unlike the Congresscritters, the police are working for free right now.  If they didn't, they'd have to quit.  And whether they get paid for doing their jobs and keeping the Capitol and the people in it safe, is still an open question.  Signs, however, point to "No."

If an officer has been shot (let us pray not), perhaps the right publicity for that person would win back pay for all furloughed federal employees.  That would be a silver lining, of a sort.  Then again, even that may not be enough.

'Cause we don't really need a federal government, right Marsha Blackburn?  I mean, really, how can we miss it if it won't go away?  Amirite?

Oh, and Rep. Tim Griffin of Arkansas is just awesome!  Of course, he did apologize, and even deleted the offensive tweet.  But only after he stood by it as a perfectly reasonable response to the situation, and something he'd been saying for days (so he's not just a stupid hothead, he works at it!).

Arkansas must be so proud!