Fear of a non-gray planet 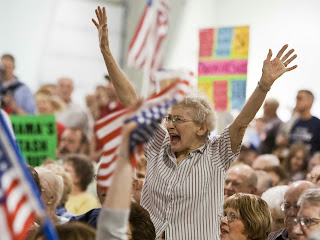 Screw the grandkids!  They don't even come for Thanksgiving!

The problem in America is not the browning of America; it's the graying.

They think young people are not measuring up. That the grandsons and daughters and nieces and nephews expect to get free college loans, and don’t get a job, and hold ideas that are not very American in their view — like Obama. Obama symbolizes all of this.

How does that play out in the politics around the Affordable Care Act, and these accusations of raiding Medicare?

One of the big mysteries that we’ve tried to deal with in our research is why the Affordable Care Act, which after all is fairly moderate — it’s an extremely important piece of legislation, but it’s moderate in its means — why would that become a flashpoint?

Well, despite all of the particular policy features that came from conservative origins, it is a powerfully redistributive law. The people left out of the insurance system have been lower income and more moderate income workers.  They’re a younger population, browner and blacker. And then you come along with a president who symbolizes everything that conservatives and Tea Partyers hate. And he proposes to raise taxes on wealthier people, Medicare beneficiaries and business to pay for insurance for those people who’ve been left out. So Obamacare really symbolizes the idea that this new America is going to take something from “our America.”

The hatred of grandchildren is an interesting shift; when Bush wanted to privatize Social Security, it was largely credited to grandparents that it didn't happen, because they supposedly knew what that would do to their grandchildren.  As ever, gross generalizations, even from someone like Theda Skocpol, have to be taken with a measure of salt proportionate to the generalization.

But I've seen this dynamic before, and I've seen it turned against even one's adult children:  this much is ours, and you don't understand, and you can't take it from us.  It's part of the reason for the chart here.  Not all of it, certainly; but a part of it, to be sure.  Just as we have at least socially and politically, segregated ourselves by race and ethnicity (I say from one of the most racially and ethnically diverse neighborhoods in the most ethnically diverse city in the country), now we, at least socially and politically, segregate ourselves by age.

I sometimes think this will only get better when more of us move off the stage and make room for the generations below us.  I know some of these elderly represent the "Greatest Generation," which is not holding up their label (imposed by a Boomer that it was), but too many of them now have to be Boomers young enough to be elderly but not to be too old and tired to be politically active.

It may be the ancestors who ate the grapes that set our teeth on edge, but we will have many sins to pay for before this is over.