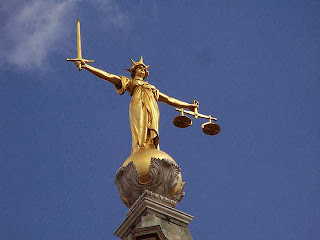 Justice ain't blind, and justice is a lady!

A point of personal privilege:  I worked for Lee Yeakel once, long, long ago.  We disagreed vehemently on politics (he was a Republican; obviously, as he got appointed to the Federal Bench by Bush the lesser).  But I always admired his reasoning and his ability to let the law do what it must do.

So I wasn't surprised by his decision that Texas' latest attempt at restricting abortions was unconstitutional.  The State obviously thought they had this one in the bag, especially since Lee got slapped down by the Fifth Circuit the last time he ruled in favor of Planned Parenthood.  But I think (from glancing through the opinion) that he's on solid ground this time.  I have reasons for my optimism:

Mississippi passed a similar law last year, which a federal judge also blocked pending a trial scheduled to begin in March. Mississippi's attorney general asked the 5th Circuit to lift the temporary injunction so the law could be enforced, but the judges have left it in place signaling they believe there is a legitimate constitutional question.

The Attorney General (who is running for Governor against Wendy Davis) filed an "emergency appeal" with the Fifth Circuit, obviously expecting to catch lightning in a bottle a second time.  This ruling, however, is not an injunction but a final ruling, so I'm not sure Rule 8 (or any other basis for immediate relief) would apply here.  Still, the Fifth Circuit has a history of clamping down on trial judges it disagrees with on Constitutional issue; so, we'll see.

At trial the State pretty much assumed they had this one won.  The Court's opinion, at a glance, pretty much shreds each and every one of the State's factual and legal arguments, resting the legal arguments both on accepted standards of review, and on Casey.

My only regret is that I wasn't in Austin to listen to the trial, or to visit with Lee afterwards.  I think it would have been an interesting conversation.