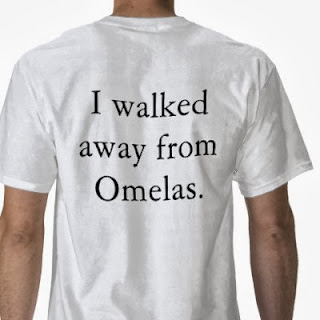 Of course you did, dear.

In Praise of Ursula LeGuin:

Let’s fire up the old ansible and send an interplanetary happy birthday to Ursula K. LeGuin on her 84th orbit. LeGuin is one of those science fiction/fantasy writers who gets to be called “literary”; her work actually shows up in college literature anthologies — usually the short story “The Ones Who Walk Away From Omelas,” a fable about moral complicity in injustice that college freshmen usually decide has to be about communism, but that I’d really like to try using in a class someday in conjunction with some reporting on where iPhones come from.


I've used "Omelas" this way for nearly 10 years now, on average once a semester or so (at least once a regular term, anyway).  I point out that the rare earth which makes cell phones work (unless the technology has changed that much since I read the NYT Magazine articles many years ago) is extracted from mud in the Congo, mud gathered by hand by women who carry it in baskets miles through the jungle to a collection point, for which they are paid pennies. Without the rare earth in that mud, however, their cellphones would be paperweights (buildings no longer have windows that open, nobody knows what the hell a paperweight is, so maybe my comparison is inapt), and the manufacturers who get rich off such phones would go out of business.  I make it quite clear their convenience rests on the misery of people in the "basement" of the world, yet we don't even admit they exist (which puts the people of Omelas one up on us).

And the reaction from the students is the same:  they still think Omelas is imaginary, and that they'd just walk away from it.

Recent submissions actually specified places they would go away from Omelas.  Oddly, the popular choice seemed to be mountains:  Colorado or the Ozarks of Tennessee.  Every one his (or her) own Jeremiah Johnson, I guess.

But never a clue about the interconnectedness of which Omelas is a parable, or how much we really are our brother's keeper, and what that really means.

Such, anyway, is the power of parables.