Wind it up and see if it runs 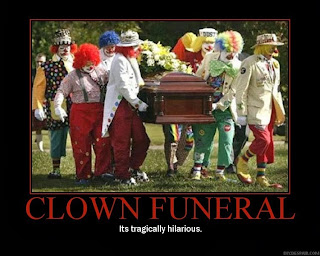 
Along the lines of throwing it against the wall to see if it sticks, can somebody explain this "tactic" to me?


The new GOP line is that default won't matter because it won't happen, or it won't hurt, or it will be good for us, or it will all be Obama's fault if it does hurt (which it won't, but it will still be his fault), or it will be a "managed catastrophe," a phrase which will join "jumbo shrimp" and "military intelligence" in the Oxymoron Hall of Fame.

So either default is the ultimate weapon of the GOP, or it's a nothingburger of no consequence.  Does that mean the GOP is willing to destroy the country in order to save it, or are they trying to con their base into believing default is no big deal so raising the debt ceiling is not "surrender"?  Or do they really believe nothing is going to happen, but they want to test their theory on the rest of us?

And which ever answer is correct, why would anyone want these clowns to be in charge of a two car funeral, much less anything more complicated?