Is our children learning? 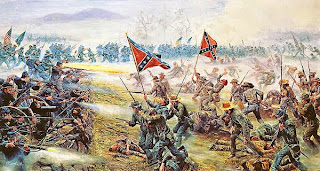 The Big Idea can never fail....

The deep irony of the observation that this shutdown was just secession by other means is the proof that the boil is never lanced, the fever never broken.

We fought the bloodiest war this continent has ever known, and still the "fever" never abated.  It flared up again with Reconstruction and American apartheid, boiled up when JFK started talking about civil rights and LBJ put it into law on JFK's legacy, and it's come back again in the Tea Party.

This is a very familiar sentiment to those of us who grew up in the South:

They might have lost the battle, but they'll win the war. They just need to find a way to get people to listen.

There is a plaque on the backside of a column in the rotunda of the Texas Capitol, a plaque put there by private, not public, interests.  It's about the cause of the Civil War.  Almost 100 years after that war ended, a group felt aggrieved enough to still argue the cause of that war was just, and that cause was not slavery.

"We've been talking amongst this group for the last four weeks about fairness. ... That is a winning argument for us," Rep. Mick Mulvaney (R-SC) told reporters. "Somebody asked whether it would be different next time, in January or February, whenever we take this up again. The natural inclination is to say 'No, it will be exactly the same. But if we can figure out a way to drive that message home, that this is about fairness ... then the outcome may well be different."

And if people would just understand the Civil War was not about slavery, "then the outcome may well be different" next time around.

Everything old is new again.