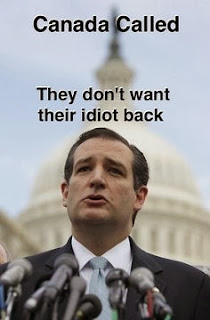 Not that anyone will pay really close attention to this, but:


“The House of Representatives has repeatedly compromised already," said Cruz, who already who spoke against funding the law on the Senate floor for 21 hours earlier this month. "The House began -- it is the view of every Republican in this body, and indeed every Republican in the House, that Obamacare should be entirely and completely repealed. Nonetheless, the House started with a compromise of saying not repealing Obamacare but simply that it should be defunded.”

Ted Cruz wants us all to remember IT REALLY IS ABOUT OBAMACARE!  And not just about who will "negotiate."

Because it is clear, as far as the Junior Senator from Texas is concerned, "negotiate" and "compromise" mean the same thing:  give us what we want.  Nothing more, nothing less.

I'm just glad he clarified that.  Now we know why the government has been shut down, and who did it.
Posted by Rmj at 5:30 PM