Put down those pliers! Hand me that dwarf! 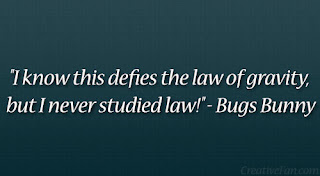 Cartoon characters have the best excuses


Let's see, James Woods calls Barack Obama a liar, an abomination, "a threat to the integrity and future of the Republic," and holds him responsible for death benefits not being paid to military families even though Congress is responsible for all government appropriations.

And he concludes with: "I am truly saddened that the few Lib detractors are so ugly in their approach. I would welcome polite differing viewpoints."

And in other news:

“I don’t think that the government should be involved in health care or health insurance,” says Greg Collett, a 41-year-old software developer in Caldwell, Idaho, who would rather pay the fine for now -- $95 the first year -- than signup.

“I calculated it out and it is cheaper for me for the next four years to pay the fine rather than get coverage,” Collett said. “At some point where it would make financial sense to pay for insurance rather than pay fines, I will make the decision from a financial standpoint.”


But that's not the good part, this is:

Collett, who is married and has 10 children, says the kids are covered by Medicaid, the joint state-federal health insurance plan for people with low income and children who are not covered.  But it’s “absolutely not okay,” that they are, Collett says quickly. “There are a lot of people out there that’ll cry foul."

Collett, whose children are home-schooled, likens taking Medicaid to sending children to public school. He also does not approve of government-funded public schools. “The government is taking your money. They are spending it on things they shouldn’t be,” he says. “Trying to get whatever you can back -- I have nothing against that. You have to at some point try and get your tax dollars back.”

So home schooling is getting back the money he pays for public schools?  Maybe he should rob himself to get back some of that tax money he's paid for police protection; or burn his house down, to get some value from the fire department.  He can certainly wait until he's in the emergency room trying not to die from the blood loss, and then make that health insurance decision from a financial standpoint.  But if it's a public hospital, well....

And this guy almost makes sense:


John, 61, who lives in Butte, Montana and declined to give his last name or occupation, is uninsured, but doesn't believe having health insurance at all is a good idea because it drives up prices. “The entrance of a third part payer really has been the cause of health care being out of price," he says.

“If you are not in a direct transaction with the person using the service, then all kinds of things get whacko,” John said in a telephone interview.

Although he's careful to keep himself in good health, he understands he's taking a big risk.
“I would benefit from a socialized healthcare situation right now. But that’s not to say that the socialized method is a good idea,” he said. And he doesn’t gamble with his two sons. One, in college, is covered through the school plan, while his high-school-aged son is covered by his mother’s health insurance that she gets through her employer.

He might eventually sign up for health insurance on an exchange, or Medicare when he gets old enough. “I am not a martyr. I’ll have to deal with it and maybe I’ll be forced to get on the bandwagon and say fine,” he said. “But we have not addressed the problem. I honestly believe that socialized medicine will break this country,” he adds, referring to the bitter debates over Medicare in the 1960s.


This is when you remind yourself it's a representative government, and you start to wonder how it's lasted this long.  Because while we're at it, who approved that whole law of gravity business?  Not this Congress:

Maybe it's the altitude, but I just heard the most amazing thing on liberal MSNBC here on my flight to Atlanta. Andrea Mitchell was interviewing Rep. Jeb (Jeb) Hensarling of Texas, and she felt compelled to point out to Congressman Jeb that lifting the debt ceiling meant only that we would be paying bills for bills and programs that Congress already paid for. Congressman Jeb replied that "this House" didn't vote for the stimulus, and that "this House' didn't vote for Obamacare. This is an interesting exercise in constitutional theory -- that one Congress is not required to pay for bills and programs passed by a previous Congress. By this theory, Congressman Jeb and his fellow vandals could demand an elimination of Social Security as a pre-condition for "negotiations" since "this House" didn't vote for the Social Security Act.