In our telos is our beginning.... 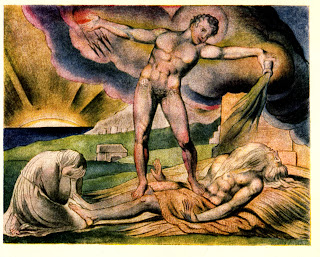 Because for some reason Blake's images make sense to me here...

I come to this via Thought Criminal (and I continue to wish Anthony well, and pray for his speedy recovery).  I mention it because of my recent Ted Cruz obsession (I've long ago given up my Sam Harris obsession).  I think I can see Ted Cruz's future from here.

NPR this morning, in a story on Cruz, quoted a political observer surprised by the junior Senator from Texas' rise to prominence.  One could draw an almost exact parallel to Sam Harris, whose first book, a mindless diatribe on Christianity (do I betray my feelings?) won a Pen/Martha Albrand award and much praise for its "courage."  Harris rose quickly to prominence, usually mentioned in the same breath as the late Christopher Hitchens and the still extant Richard Dawkins as part of the "New Atheist" vanguard.  By now, he's been eclipsed in his atheism by even Daniel Dennett.  Small wonder he got bored with Christianity and went after Islam.  And now he's poaching on Malala Yousafzai.

Harris doesn't deal in facts and research; he deals in accusations and pronunciations.  ("Harris doesn’t cite how exactly he knows that her nomination has increased 'anti-Western sentiment' in Pakistan or what exactly he’s basing this belief on; but he doesn’t have to. It’s simply another expression of the naked ignorance and fear of the brown, Muslim hordes on the other side of the Earth, which Harris has built his career on.")  There isn't a shred of research in his first two books on Christianity, and I don't imagine there is any more substance to his books on Islam or his recent essay on Malala.  Let's go with this for a second:


Given the requisite beliefs…. an entire culture will support such evil. Malala is the best thing to come out of the Muslim world in a thousand years. She is an extraordinarily brave and eloquent girl who is doing what millions of Muslim men and women are too terrified to do—stand up to the misogyny of traditional Islam.

You would think a self-described philosopher and neuroscientist would understand the importance of distinctions and nuance.  Sadly, no.

Ted Cruz, after the government re-opened and default was averted, was still decrying Obamacare as a jobs killer and a ruiner of lives which was destroying the country.  This caused the panel on Chris Hayes' "All In" to wonder aloud:  does he really believe this stuff?  Cruz's rants are as fact-free as Harris'; and apparently about as effective.  Harris' factless assertions are better detailed in the article at Salon.  I only want to point out that Harris's predilections, like Cruz's, seem to have been formed "in Ivy League universities."

Where is Cruz going, then?  Pretty much where Harris has gone, or Dawkins, for that matter:  into irrelevance.  Cruz has gained great fame, but how does he sustain it?  By screaming louder?  By getting in front of more TV cameras, more adoring crowds?  Is he going to eventually find a Malala to latch on to, hoping to revive his own moment of glory which is even now fading away?

He's certainly not going to overturn D.C. and the political culture that has been created there over 200 years.  Barack Obama tried that, and found out the Presidency isn't nearly that powerful.  Even kings don't have that kind of power.  Even Kim Jong-Un had to please the power structure of North Korea to maintain his inherited role as Supreme Leader.  Harris is clearly irrelevant now because he has latched onto someone of true importance and is trying to burnish his reputation with her glory.  Malala will not change the world, but she'll have a far more positive effect on it than Sam Harris ever will. Harris grabs hold of her as a drowning man would a life preserver.  But she is not an object for his salvation, and if he is drowning it is because he refuses to swim.

Ted Cruz is on about the same trajectory.  He continues to dance with those what brung him, but he mistakenly believes they are the majority he needs to reshape the republic in his own image.  I don't know that he'll try to grab hold of someone of far nobler spirit than his when he realizes his 15 minutes have run, but he's on the same glide path:  a narcissistic self-obsession which he mistakes for self-awareness and a belief in his own self-worth that would make Emerson say with Eliot "That is not it at all.  That is not what I meant, at all."