We have met the enemy, and he is us 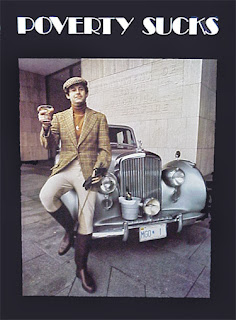 Better thee than me


As best I can piece it together, the government shutdown will continue for the foreseeable future and a government default on US debt is absolutely inevitable.

Because we apparently are in thrall to sociopaths:

"The president's position that ... we're not going to sit down and talk to you until you surrender is just not sustainable," Boehner said on Capitol Hill. "It's not our system of government."


Somebody remind me when our system of government became a pitched battle between two opponents with winner take all and death before surrender?  What system of government is that, where a negotiation which does not include some form of blackmail or at least coercion, is a "surrender"?  Surrender?  Of what?  To whom?

It's not a diagnosis to label one side in this argument sociopaths, but what other term fits?  It could be the entire GOP agrees with the goals of the Tea Party (that's pretty much Dave Weigel's view).  It could be the GOP is scared to death of the Tea Party's ability to primary incumbents out of office (this seems much more likely.  The NRA hold on Congress goes back to Clinton's attempt to pass gun control.  It failed, and in the next election Texas went blue, having been a Democratic one-party state since Reconstruction.  It was coincidence, but one of the longest serving Democrats in the House lost his seat that year.  That alone was enough to make the NRA a king-maker in D.C., and it has been so ever since.).  Whatever the motivation, the result is apparent in the Speaker's words:  to yield now, to simply do the job of Congress and pass laws which the President may or may not veto, or bills which may or may not be passed by the other chamber, is "surrender."  To yield without prevailing is to lose, and to lose is to give up.  Give up what?  Give up to whom?

Bill Moyers is right; this is secession by other means.

The argument of surrender is one troubling item, but not the only one.  There are at least 9 GOP Reps. and Senators who have publicly said default is not a disaster.  Dave Weigel has upped that total to 14, at least.  The reasonable reasoning runs like this, from Orrin Hatch:

"I don't think the markets have been spooked so far, and I personally believe that if they realized there was a legitimate attempt to make the government work, they would be less likely [to be spooked]."


Confidence fairies will save us all! Then the unreasonable reasoning goes like this, from Joe Barton of Texas (well, of course):

“This talk about default by the U.S. Treasury is nonsense. The president can be smart or the president can be stupid. And I would assume as smart as President Obama is, when push comes to shove, he’ll be smart. So we are not going to default on the public debt. But that doesn’t mean that we have to pay every bill the day it comes in.”

Because the financial markets really don't care what bills get paid when.  I mean, our credit's good, right?

Your creditors - banks and foreign nations - evaluate you not only by your ability to pay (which the US clearly has) but also the regularity with which you actually do pay - your propensity and willingness to pay. Once you start paying some obligations and not others, investors start to get freaked out, if even you're still paying them. Because who's to say they're not next to get stiffed. This is what Wall Street is working very hard to tell Washington right now. Confidence is the simple assurance that the full force of the US government is beyond the obligation; and it's going to be done by the book. Payments will be made right on time. Once you issue bonds that the government of the United States itself isn't sure are legitimate, you've punctured the balloon and there's no going back. Best case you'd have the 'real' Treasury bonds and then a few months of heavily discounted US question mark bonds. So two classes of US bonds. US junk bonds if you will.

So whether we don't pay our bills at all, or don't pay them on time, or even just decide to pay our bondholders first and everyone else (WIC, Social Security, the military, government employees) second, the effect is the same.  And the idea this can be done isn't coming from just one or two extremist politicians:

The theory goes like this. Several times, Republicans have passed (or endorsed) the Full Faith and Credit Act to assure investors that the country won’t default. Just like Obama should be moving around money to keep the parks open, he should be telling investors that he can use incoming revenue to avert a default by paying debt service, entitlements, and the military.


Except of course, Obama simply can't.  The government doesn't work that way.

MP: That’s an underappreciated complication with any prioritization scheme. The U.S. government’s payment system is sprawling. It involves multiple agencies. It involves multiple interacting computer systems. And all of them are designed for only one thing: To pay all bills on time. The technological challenge of trying to adapt that to some other system would be very daunting and I suspect that if we were forced into a mode like that the results would be riddled with all kinds of errors.


And, of course, all those government employees at all those computers have been furloughed, so....

But the complexity of the federal government be damned!   There is no federal bureaucracy (except as evil minions), there is only Obama!  So when the default happens, the pain inflicted on the country is all Obama's fault. And the shutdown is Obama's fault, too!  In fact, everything that goes wrong is Obama's fault!  And lest you think I exaggerate:

"Well, it's gonna take us off the edge economically. It's gonna destroy our economy. And it's going to push us into a total economic collapse of America. And that's exactly what I mean by, 'It's gonna destroy America.'"


That's Paul Broun on CNN.  The "it" in his statement is not default; he's talking about Obamacare.  Default will not destroy us; broader access to health insurance, however, is certain doom.

In the aftermath of default there might be an electoral cost.  Perhaps a few GOP representatives might face Democratic challengers; but the hardcore crazies, like almost the entire Texas delegation, might as well be appointed for life.  They will blame Obama, and their voters will agree, and at worst the Democrats will gain a slight majority in the House in 2014.

And if that happens, the loonies will take it as proof the losing GOP House members were squishes.

There are arguments that if Obama issued a trillion dollar coin or just ignored the Congress and stood on the 14th amendment to defend that nation's credit rating, he would be impeached.  It isn't too far fetched to say that if he doesn't deal with the default as the GOP seems to think he can, he may be impeached anyway.

The paradox of the GOP position is that either the debt ceiling is a disaster Obama must avoid at all cost, or it is a nothing burger that isn't even a bargaining chip.  If it isn't a disaster, then when it becomes one it's Obama's fault, but until it does it's just a scare tactic because besides we have to get our debt under control (even though it isn't $17 billion anymore, and besides we could raise taxes to fix it in a heartbeat) and Obama just needs to negotiate!

What is clear is not that the GOP or the Tea Party or the Koch brothers are sociopaths; what is clear is that all three want to run the country for the benefit of the wealthy, and with utter disregard for the concerns of the not wealthy.  Except when those not wealthy show up in D.C. in wheel chairs, bound for the WWII memorial (no other memorial in D.C. counts).  It could be people are trying to visit the US cemeteries in France on a once-in-a-lifetime visit, but if there are no cameras around for politicians to stand in front of, can a tree fall in the forest?

Bill Moyers calls this "secession by other means."  Josh Marshall demurs that it's closer to nullification.  Either way, it has a familiar ring to it; and is it a  coincidence that the President at this time is a black man?  Hardly.  It is, in fact, the excuse for trying to sabotage democracy, as Moyers terms it.  But this is not in order to save democracy; no, this is done in order to save privilege.  Same as it ever was.

Default on the national debt is coming as sure as sunrise, unless enough big money donors get the attention of enough non-Tea Party House members.  David Corn told Lawrence O'Donnell last night that Tea Party members don't care about committee appointments or any of the perks of office the Speaker traditionally doles out; and many of them don't have to care about re-election.  So they have no reason to follow the Speaker, nothing to lose if the government burns down, and they are convincing themselves Obama is causing it anyway, or just trying to make them look bad.  There is an enormous amount of bad blood in D.C. now, with people publicly or on the record behaving like tired children who need a cookie and a nap.  The problem is, they won't get either, and their tantrums have very real world consequences.

In the end, there is no one to blame but ourselves.  We return 90% of the Congress to their offices, although only about 10% of us approve of our Congress as a whole.  We elected the idiots who say government is the problem; we gave them the government and now, like a child with a pump shotgun, they are shooting up the place with us in it.

"We" is a group too inchoate to blame, but what other group is any less amorphous, or any more responsible?