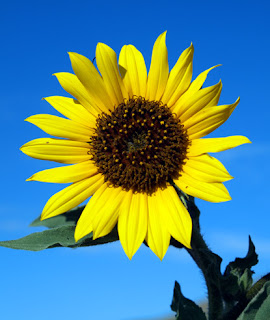 Consider the sunflowers; or was it the lilies?  Whichever....

"For a century, we labored to settle and to subdue a continent. For half-a-century we called upon unbounded invention and untiring industry to create an order of plenty for all our people. The challenge of the next half-century is whether we have the wisdom to use our wealth to enrich and elevate our national life, and to advance the quality of our American civilization. Your imagination, your initiative, and your indignation, will determine whether we build a society where progress is the servant of our needs, or a society where old values and new visions are buried under unbridled growth...For in your time we have the opportunity to move forward not only toward the rich society and the powerful society, but upward to The Great Society...There are those timid souls who say this battle cannot be won, that we are condemned to a soulless wealth. I do not agree. We have the power to shape the civilization that we want. But we will need your labor, your hearts, if we are to build that kind of society."


"The Great Society rests on abundance and liberty for all. It demands an end to poverty and racial injustice, to which we are all totally committed in our time. But that is just the beginning. The Great Society is a place where every child can find knowledge to enrich his mind and to enlarge his talents...It is a place where the city of man serves not only the needs of the body and the demands of commerce but the desire for beauty and the hunger for community...But most of all, the Great Society is not a safe harbor, a final objective, a finished work. It is a challenge constantly renewed, beckoning us toward a destiny where the meaning of our lives matches the marvelous products of our labor."


Via Charlie Pierce.
I don't always agree with Mr. Pierce (yes, the winners are at war with the losers, and the fix is still in.  Been that way since at least '72, and no, it ain't changing.  Deal with it.), but when he's right, he's right. And yes, Rick Perry really is an idiot.  He's so embarrassing even Texas didn't want him to run for governor again.  We have our standards, such as they are.
All the more reason we need, as Mr. Pierce says, a little LBJ in us.  We could also use the economy he and JFK had, instead of the one we started trashing in the '70's (which was immediately, as has been ever after, blamed on "social spending" by "big government.").  Easier to be generous when you feel like you have plenty enough already.
I know, I know, the "moral" view is that society should be generous anyway.  I'm too Niebuhrian to think that gets far beyond discussion among liberal Christians and other religious persons of a certain ilk.  But that gets us back to the Theology of Scarcity, which is certainly behind the comments of the father of Ted Cruz:


We've been doing this series here that God laid on my heart: Getting to the top and staying there. A message for us as individuals, the kingdom of God, but also for America. It's not enough to get there. We need to stay there. It's not a coincidence that in a few weeks, we go into what's called in the Bible Rosh Hashanad [sic]... It will be the beginning of the spiritual year 2012. The number 12 means divine government. That God will begin to rule and reign. Not Wall Street, not Washington, God's people and His kingdom will begin to rule and reign. I know that's why God got Rafael's son elected, Ted Cruz the next senator.
But here's the exciting thing... The rabbinical teaching is... that in a few weeks begins that year 2012 and that this will begin what we call the end-time transfer of wealth. And that when these Gentiles begin to receive this blessing, they will never go back financially through the valley again. They will grow and grow and grow. It's said this way: that God is looking at the church and everyone in it and deciding in the next three and a half years who will be his bankers. And the ones that say here I am Lord, you can trust me, we will become so blessed that we will usher in the coming of the messiah.

Let's just get it out of the way:  Rafael Cruz is nuts.  There is nothing the least bit Biblical about this kind of nonsense.  But you can't be rich and a king without somebody to be richer than and having somebody to rule over, so the Theology of Scarcity is rattling its chains behind Cruz Sr.'s pronouncements.

The irony here is that LBJ learned his concern for social justice from the speeches of William Jennings Bryan, a man popularly considered a religious yahoo by people who think "Inherit the Wind" is a documentary (and presumably think Shakespeare's history plays obviate any need to know anything about English history.  No?  They ignore English history for other reasons?  Yeah, probably so.).  Bryan's concern for people was rooted in his religious beliefs, religious beliefs which would obviously be antithetical to the dominionism of Rafael Cruz (and Ted has said there are two men he admires most:  his father and, not the Holy Ghost, but Ronald Reagan.  Yes, I take Cruz Sr.'s rantings rather seriously.).  Any concern for people, in fact, is antithetical to the lunacy of Rafael and Ted Cruz.

LBJ had the good grace, in his most famous political ad, to quote the Christian poet W.H. Auden.  Bobby Kennedy misquoted (and frankly misappropriated) Aeschylus, albeit to good effect (the worthiness of LBJ's appropriation is debatable, and I still wonder if Auden pulled that poem from his canon because of that ad).  Regardless, giants once walked among us who knew how to quote well and to good effect, and it is good to remember that this is so.  Such things assume a body politic aware of its heritage and its cultural legacy, for better and for worse.   All Rafael Cruz knows is greed and stupidity, and all his famous son knows is how to fling poo at people and monkey wrenches at complicated machinery.  We could use more LBJ and less Cruz; and how about we add a little RFK and MLK, too:

The gross national product includes air pollution and advertising for cigarettes, and ambulances to clear our highways of carnage. It counts special locks for our doors, and jails for the people who break them ... It does not allow for the health of our families, the quality of their education, or the joy of their play.
-- Robert F. Kennedy

We must recognize that we can't solve our problems now until there is a radical redistribution of economic and political power....[What is required is] a radical restructuring of the architecture of American society.
-- Martin Luther King, Jr


or Jeremiah, to remind us where abundance comes from:


Or the Psalmist, to remind us what abundance truly looks like:


Or Isaiah, to call us to the table:

"Come for water, all who are thirsty;
though you have no money, come, buy grain and eat;
come, buy wine and milk, not for money, not for a price.
Why spend your money for what is not food
your earnings on what fails to satisfy?
Listen to me and you will fare well,
you will enjoy the fat of the land. (Isaiah 55:1-2)


And while you're at it, leave all concern with power and dominion behind:

The consistent thread through the Hebrew scriptures into the proclamation of the basileia tou theou is that humans must eschew and avoid political power, because power draws its source from the fear of scarcity.


And as long as I'm quoting myself:

The simple truth of the Scriptures, of the Gospels, of the Letters of Paul and Peter and James and all the others, even of the Revelation to John, is that the world you live in is quite literally the world you see. Change your sight, change your reality. There are streams in the desert, and they are part of the prophetic vision; but you have to look to see them. We could call it seeking our place of resurrection. It's a better concept than seeking our self-assured security.

Are we on the road to scarcity? Or do we live in a world of abundance, able to satisfy the needs of all?

You, as Jean-Paul Sartre would remind us, choose.

Choosing "king" is the worst of your options.