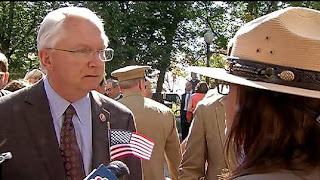 I'm risking something to state this, but the Neugebauer incident (as it should come to be called; you heard it here first!) should be examined in all its ramifications.

This is the prevailing sentiment, at least on the left, on the incident:

In somewhat related news, Texas Rep. Randy Neubarger [sic] is today’s worst person in the world for picking on random National Park Service employees who have to keep people out of the World War II Memorial in order to make himself look tough.


Yup, yup, yup, yup, and yup!  But let me point out something about Texas, and especially about the 19th district from which Mr. Neubarger hails and which he represents:  they are conservative in many, many ways, not just politically.

Way back when, when Ann Richards first ran for governor, her opponent was Clayton Williams, a rancher from Mr. Neubarger's neck of the woods (well, I'm being loose with geography there, but Mr. Williams was, like Mr. Neubarger, from "West Texas," an area west of "North Texas"  and "Central Texas," and south of "the Panhandle" but north of the "Trans-Pecos region."  It's complicated.)

Anyway, Mz. Ann was not cruising easily to her full title of "the Gov. Mz. Ann" when she and Mr. Williams had a debate, and Ann Richards knew the future better than the rest of us.  She knew Mr. Williams would refuse to shake his political opponent's hand just before the debate, and right in front of the cameras.

He did.  And he lost the race he was winning.

Even Republicans in Texas knew better than to be rude to a lady, and Mz. Ann was a lady.

Now, keeping in mind that all politics is local (90% of Congress gets re-elected every year, yet Congress has a 10% approval rating.  Congress sux, except for my Congresscritter.), note carefully who Mr. Neubarger chose to unload on, in a very ungentlemanly fashion:

Coincidence?  I think not.  And does that drive a nail in Mr. Neubarger's coffin, even in the 19th District of Texas?

It doesn't help.  If he gets a Democratic opponent (and he may not, because there may not be enough Democrats in the 19th district to form a caucus), I would use that videotape over and over again, and point out who he was yelling at, and how she maintained her composure in the face of a hectoring bully who was simply rude.

I know it's sexist.  But it could also be very effective.  Frankly, it makes me even angrier he could be such a public ass, and it's obvious to me he picked a female to berate, because he was comfortable doing it.  Nothing, in other words, happens by accident.

Now does pointing it out seem quite so sexist?*

*And shouldn't we point out the Representative is still getting paid, while the Park Ranger is not?