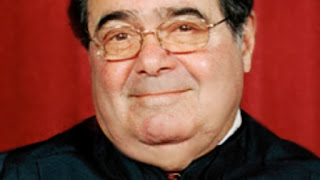 
Dahlia Lithwick fears for us because Antonin Scalia lives in the wrong bubble:

Part of this is probably generational. When Scalia suggests he doesn’t know anyone—especially “ladies”—who uses foul language, you can practically hear Senior’s eyebrows clang against the ceiling. Part of it is gender, to be sure. But at least a part of it is the absolute polarization of American life: the complete intellectual silos that are our neighborhoods, our media, our friends, and our intellectual sparring partners.


A lot of my reading material is either literature, philosophy, theology, or websites.  Not in that particular order, either.  "Websites" means liberal or progressive ones, too.  I don't frequent right-wing websites, I don't know where FoxNews is on my satellite connection (but I do know where MSNBC is), I don't listen to Rush Limbaugh (I did, 20+ years ago, when there was hardly any talk on radio to listen to.  Today I listen to NPR exclusively because someone is always talking and I find almost all broadcast music boring.  Let's talk about musical tastes another time, huh?).  And while I pride myself on having friends and/or acquaintances from many walks of life (my extended family is mostly non-college educated and almost all of them are more conservative politically than me), I mostly don't talk politics with them because I know we'd disagree.  I don't even tell them my most radical ideas, like the power of powerlessness, and the importance of being a servant, and of replacing the theology of scarcity we all live under, with the theology of God's abundance and grace (and not just grace leading to spiritual salvation in the sweet bye and bye).

I don't talk about much of any of that stuff with my friends.  Does that mean I'm as isolated as Dahlia Lithwick thinks Antonin Scalia is?

I have a newsflash for these pundits who are younger than me (clearly), and this isn't just because I'm closer in age to Scalia than they are:  age brings out what you most are, who you were most likely to be.  You may think you choose that in your feckless adolescence, that you set the course of your fate and captain the ship of your destiny by steering rightly by the stars of your enlightened soul:  but you end up pretty much with the attitudes (at least) that you had in childhood.   You'll no more escape that than you'll change your eye color.

I'm hardly carrying a torch for Scalia here, whose judicial opinions I despise.  I've no doubt I'd find him no more charming than Amanda Marcotte does.   But I will also admit I see a coarsening of society from time to time, in small things I'd rather not see; and I lament the damage.  I'll also admit I'd rather be an agent of change rather than just complaint, so I tend to keep such complaints about social behavior to myself (if Miley Cyrus is a cause for despair, is she more to blame than us, the ones who create the society that relentlessly sexualizes girls while leaving boys to be boys?).

Does that put me in a silo?

Is this really new, that people associate with whom they like, and stay away from people they don't like?  Is it new that generations don't seem to speak the same language, or live in the same world?  I know people who lived in Houston when the primary means of travel was the horse and buggy.  I know people as cut off from each other in the pews of the church they attend, as Scalia supposedly is on the bench of the Supreme Court.  I find it odd to blame modernity for these conditions, as I can remember when the only social and political voices I could hear in my childhood were very middle-class and conservative ones.  When I discovered Soren Kierkegaard in high school I thought I'd found a radical rebuke to the very conservative Southern Baptist culture I grew up in.  It wasn't that Kierkegaard was radical, or suppressed; it's just that he was completely unknown, and reasoning about religion and Christianity that he presented was almost completely unavailable where I lived.  I grew up in a silo, in other words; it is called the South.

But since then I've met people from Chicago and New York and St. Louis, to name three cities; and I find them as provincial and blinkered in their ways as the child I was in small-town East Texas.   It may be technology, from TV to the internet, has expanded our knowledge of the world.  But that they haven't made us all possessors "of the cosmopolitan open-mindedness that leads to true charm and wit."  Indeed, go back and look at old movie newsreels, the things that first brought the world to America:  they are remarkably tolerant and even-handed, even respectful.  Well, respectful in a way you don't get on FoxNews or even CNN, where images are simply thrown on the screen and any attempt to explain the cultures they portray is lost in the rush to detail the calamity or how many Americans were involved in the violence, or what the violence has to do with America at all (because if it doesn't, why are you telling me this?).  I think America as a whole is more isolated than it was in the 1940's, which is saying a lot.

Part of this is certainly generational.  My parents didn't understand my world any more than my daughter understands the world I grew up in.  Duck 'n' cover, imminent nuclear war, "separate but equal;" prayer in schools; blatant and socially approved racism (see "separate but equal"), criminalizing mixed race marriages; Vietnam the "TV war"; the draft (I still remember learning in the 5th grade that I would be subject to the draft; I was almost physically ill).  My world was not my parents' world, and it isn't my daughter's, either.  Of course there are generational matters in American life.

So is it really telling that Antonin Scalia prefers to hang out with people like himself, and to surround himself with only conservative opinions?  I suppose to the extent it shatters the preferred vision of justices and judges as impartial creatures of pure objectivity who come forth from their chambers only to pronounce justice, and then return to their legal sepulchers to remain isolated from human concerns which might cloud their objectivity; it does matter.

But just as an observation that Scalia is more than a cranky hold man whose grip on jurisprudence is getting all sweaty?  I think I knew that already.