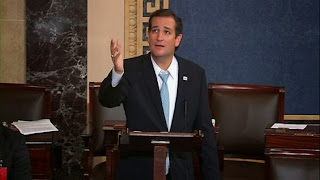 Cruz never seems to have grasped that there are people every bit as sharp as him who didn't go to an Ivy League School (even a 'top Ivy'). My read on Cruz, from talking to people who knew him very well in college and law school, is that he's so confirmed in his belief in his own rectitude and genius that he's likely impervious to what most of us would interpret as rejection or failure. This didn't work? Well, too many stupid people or cowards who didn't flock to my banner. That seemed to be the gist of his speech before the vote. And my guess it wasn't just puffing but represented his genuine belief.

Remember, this is a man who by all accounts is 100% focused on being the 2016 Republican presidential nominee who has quickly racked up a cosmically abysmal level of popularity nationwide. According to the latest NBC/WSJ poll, he has a 14% approval rating nationwide, with 28% disapproving of him. Now he's back to saying that he can't rule out shutting down the government again.

I still stand by what I said:  Cruz is modeling Daddy Rafael, right down to the insistence that those who love him are among the elect, and those who don't are damned anyway, so who cares about them?  Even if he loses the race for POTUS (which he surely would, if it came to that.  He'd lose to Millard Fillmore if the Democrats dug him up and put him on the ballot.), he will be unshaken in his conviction that the loss only proves he is in the world but not of the world, and still doing the work of the Lord.

Or of Ted Cruz; it's pretty much the same thing, at this point.