Because poets matter too.... 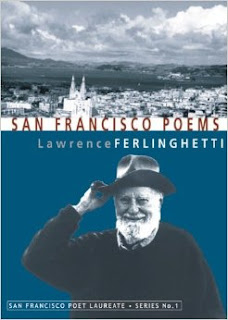 "For poetry makes nothing happen: it survives
In the valley of its making where executives
Would never want to tamper, flows on south
From ranches of isolation and the busy griefs,
Raw towns that we believe and die in; it survives,
A way of happening, a mouth."
--W.H. Auden

My daughter went to San Francisco for Christmas.  She wanted to bring me something, and go somewhere in the city important to me.  She visited City Lights Bookstore, and brought me a book of Ferlinghetti's poems published by City Lights.  The book is San Francisco Poems, published on the occasion of Ferlinghetti being named the first Poet Laureate of San Francisco in 1998.  So the book opens, not with a poem, but with the poet's Inaugural Address upon the occasion:

I certainly was surprised to be named Poet Laureate of this far-out city on the left side of the world, and I gratefully accept, for as I told the Mayor, "How could I refuse?"  I'd rather be Poet Laureate of San Francisco than anywhere because this city has always been a poetic center, a frontier for free poetic life, with perhaps more poets and more poetry readers than any city in the world.

This week's Bay Guardian has the results of a survey that "reveals a city undergoing a radical transformation--from a diverse metropolis that welcomes immigrants and refugees from around the world to a homogenous, wealthy enclave."

The gap between the rich and the poor in San Francisco increased more than forty percent in just two years recently.  "San Francisco may soon become the first fully gentrified city in America, the urban equivalent of a gated bedroom community," says Daniel Zoll in the Guardian.  "Now it's becoming almost impossible for a lot of the people who have made this a world-class city--people who have been the heart and soul of the city for decades--from the fishers and pasta makers and blue-collar workers to the jazz musicians to the beat poets to the hippies to the punks and so many others--to exist here anymore.  And when you've lost that part of the city, you've lost San Francisco."

And Richard Walker, head of geography at UC Berkeley has said, "It means a one-dimensional city, a more conservative city--one that will no longer be a fount of social innovation and rebellion from below.  Just another American city, a corporate city--a fate it has resisted for generations."

The poet puts his finger on the problem, and even the irony of a city named for a famous saint whom nobody thinks of in connection with that city:

And for another destroyer of poetry and peace, how about this killing machines, the Navy's Blue Angels, who have just carried out their annual attack on the City?  But the poetic life requires Peace, not War.  The poetic life of the City, our subjective, life, the subjective life the individual, is constantly under attack by all the forces of materialist civilization, by all the forces of our military-industrial perplex, and we don't need those warplanes designed to kill and ludicrously misnamed the Blue Angels.  They dive upon our city every year, in a frightening militarist and nationalist display of pure male testosterone.  I've seen old Vietnam ladies in Washington Square diving under the benches!  Do we really need to be reminded yearly how our places have bombed Third World countries back to the Stone Age?  In San Francisco, of all places, do we really need "bombs bursting in air to prove that our flag is still there"?  What would Saint Francis say?  Perhaps the City could disinvite them next year.

The painter who thought he was Stephan Dedalus in James Joyce's Portrait of the Artist as a Young Man setting forth to articulate the uncreated conscience of his race, saw San Francisco for the first time from the deck of an Oakland ferry some fifty years ago.
...
He walked and walked that day, and got the impression that the natives had a kind of island mentality, considering themselves San Franciscans first, on an island which wasn't necessarily a part of the United States.  He felt right at home from the first.  It seemed as ideal as any city could be for an artist or writer, perhaps like Athens at the height of Greek culture, or Dublin at the time of the Irish Renaissance--a city small enough for human conviviality and large enough for intense creative ferment, with a metropolitan sensibility.
....
Fifty years later, he awoke one fine morning like Rip Van Winkle and found himself again with his sea bag on his shoulder, looking for anywhere he could live and work.  The new owners of his old flat now wanted $2500 a month, and his studio was $3000 plus.  Many of his friends were also evicted, for it seemed their buildings weren't owned by San Franciscans anymore but by faceless investors with venture capital.  Corporate monoculture had wiped out any unique sense of place, turning the "island-city" into an artistic theme-park, without artists.  And he was on the street.


It's worth noting my daughter visited many of the "tourist spots" of the City, but she preferred the non-tourist parts of the town she stumbled upon.  And she also found it a terribly, terribly expensive place to even visit.  Although she found a great sign over the entry into City Lights.  I can't share the picture with you, but I can share the sentiment:


"Abandon all despair, you who enter here."


Good words to start the year with.