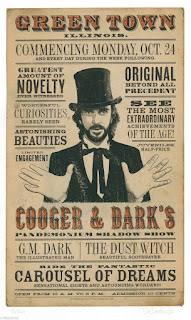 There is a scene near to the climax of Bradbury's Something Wicked This Way Comes where the father of one of the boys is trapped in the town library and is threatened by the Dust Witch.  It is clear she is going to kill him, that she is going to stop his heart through magic (or the power of suggestion, take your pick).  And just when all seems darkest, he starts laughing.

He laughs at the Witch; he refuses to take her seriously.  His laughter, in fact, becomes a weapon, but not because he means it to be such; he can't help it.  Suddenly, she's funny!  And being funny, she is no longer terrifying; and not being terrifying, she is powerless.

I suggest we take the same approach to someone who says this:

“The media should be embarrassed and humiliated and keep its mouth shut and just listen for awhile,” he said in an interview with the New York Times.

“I want you to quote this,” he said. “The media here is the opposition party. They don’t understand this country."

Outrage should follow such statements, yes?  Shock and awe and horror should rain down upon someone who declares such open warfare on a free press, yes?

Nah.  He's funny.  Anyone that stupid should only be laughed at.  Steve Bannon wants you to take him seriously.  He wants to be the Dust Witch, waving his hands, invoking the "darning needle dragon-fly" to seal your lips, while he murmurs a spell which will stop your heart.  He wants to be scary!

I don't care what position he holds in the government, he is not THE government.  He is not the Courts and the Congress and the Administration and every elected official down to dog-catcher.  He is simply Grima Wormtongue with an inflated sense of his own importance and of the power of his point of view.

He's funny!  Laugh at him; that's really all he deserves.  The "media" is the "opposition party," and "they" don't "understand this country"?  Who is that implied "we" who does, pray tell?  Steve Bannon?

That's hilarious!  He's not even the proprietor of Cooger and Dark's Pandemonium Shadow Show.  He's a joke.  The media should be embarrassed and humiliated by this guy?