The 'war on whites' 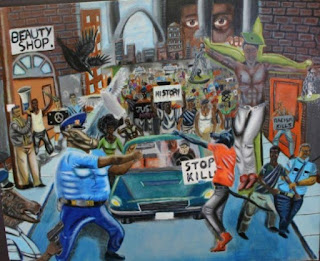 This painting is another story, but it fits in well here.

It's a compulsion, to report every small example of the "hidden wound" of American racism; especially since, for the next four years, it won't be hidden at all.   This comes from Charlie Pierce:

"It's really about political power and racial division and what I've referred to on occasion as the 'war on whites.' They are trying to motivate the African-American vote to vote-bloc for Democrats by using every 'Republican is a racist' tool that they can envision," the Republican congressman [Mo Brooks, Alabama] said on "The Morning Show With Toni & Gary" on WBHP 800 Alabama radio. "Even if they have to lie about it."


Yes, he was talking about the criticism of Jefferson Beauregard Sessions III, a man too racist to be a federal judge, but all cleaned up and de-spotted  (hem-hem) in time to be the Attorney General of the United States.  Rep. Brooks is in line to replace Sen. Sessions in the Senate, should the latter be confirmed.  At least the people of Alabama will notice no difference in the attitudes of their Senators about matters of race.

And I checked:  I'm younger than Jeff Sessions, but the same age as Lindsey Graham.  At the age of 62,  I thought I'd never hear this self-serving racist bullshit again:

Graham: I’m from South Carolina, so I know what it’s like sometimes to be accused of being a conservative from the South. That means something other than you’re a conservative from the South, and in your case people have fairly promptly tried to label you as a racist or a bigot or whatever you want to say. How does that make you feel? This is your chance to say something to those people.

Sessions: It does not feel good. … Senator Graham, I appreciate the question. You have a southern name, you come from south Alabama, that sounds worse to some people. When I came up as a U.S. attorney, I had no real support group, I didn’t prepare myself well in 1986 and there was an organized effort to caricature me as something that wasn’t true. It was very painful …

Oh, I'm sure you got over it.  As John Lewis said, during the same hearing:

It doesn’t matter whether Sen. Sessions may smile or how friendly he may be, whether he may speak to you. We need someone who will stand up and speak up and speak out for the people who need help, for people who are being discriminated against … We all live in the same house, the American house. We need someone as attorney general who is going to look out for all of us, not just some of us.

I hope that wasn't too painful for Jefferson Beauregard to hear.

Just remember, it's not about race, because it's never about race.