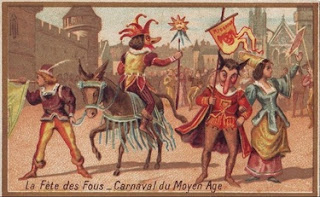 New Advent, as ever, is a treasure trove:

A celebration marked by much license and buffoonery, which in many parts of Europe, and particularly in France, during the later middle ages took place every year on or about the feast of the Circumcision (1 Jan.). It was known by many names — festum fatuorum, festum stultorum, festum hypodiaconorum, to notice only some Latin variants — and it is difficult, if not quite impossible, to distinguish it from certain other similar celebrations, such, for example, as the Feast of Asses, and the Feast of the Boy Bishop. So far as the Feast of Fools had an independent existence, it seems to have grown out of a special "festival of the subdeacons", which John Beleth, a liturgical writer of the twelfth century and an Englishman by birth, assigns to the day of the Circumcision. He is among the earliest to draw attention to the fact that, as the deacons had a special celebration on St. Stephen's day (26 Dec.), the priests on St. John the Evangelist's day (27. Dec.), and again the choristers and mass-servers on that of Holy Innocents (28 Dec.), so the subdeacons were accustomed to hold their feast about the same time of year, but more particularly on the festival of the Circumcision. This feast of the subdeacons afterwards developed into the feast of the lower clergy (esclaffardi), and was later taken up by certain brotherhoods or guilds of "fools" with a definite organization of their own (Chambers, I, 373 sqq.). There can be little doubt — and medieval censors themselves freely recognized the fact — that the license and buffoonery which marked this occasion had their origin in pagan customs of very ancient date. John Beleth, when he discusses these matters, entitles his chapter
"De quadam libertate Decembrica", and goes on to explain: "now the license which is then permitted is called Decembrian, because it was customary of old among the pagans that during this month slaves and serving-maids should have a sort of liberty given them, and should be put upon an equality with their masters, in celebrating a common festivity." (P.L. CCII, 123).

The Feast of Fools and the almost blasphemous extravagances in some instances associated with it have constantly been made the occasion of a sweeping condemnation of the medieval Church. On the other hand some Catholic writers have thought it necessary to try to deny the existence of such abuses. The truth, as Father Dreves has pointed out (Stimmen aus Maria-Laach, XLVII, 572), lies midway between these extremes. There can be no question that ecclesiastical authority repeatedly condemned the license of the Feast of Fools in the strongest terms, no one being more determined in his efforts to suppress it than the great Robert Grosseteste, Bishop of Lincoln. But these customs were so firmly rooted that centuries passed away before they were entirely eradicated. Secondly, it is equally certain that the institution did lend itself to abuses of a very serious character, even though the nature and gravity of these varied considerably at different epochs. In defense of the medieval Church one point must not be lost sight of. We possess hundreds, not to say thousands, of liturgical manuscripts of all countries and all descriptions. Amongst them the occurrence of anything which has to do with the Feast of Fools is extraordinarily rare. In missals and breviaries we may say that it never occurs. At best a prose or a trope composed for such an occasion is here and there to be found in a gradual or an antiphonary (Dreves, p. 575). It is reasonable to infer from this circumstance that though these extravagances took place in church and were attached to the ordinary services, the official sanction was of the slenderest.

The central idea seems always to have been that of the old Saturnalia, i.e. a brief social revolution, in which power, dignity or impunity is conferred for a few hours upon those ordinarily in a subordinate position. Whether it took the form of the boy bishop or the subdeacon conducting the cathedral office, the parody must always have trembled on the brink of burlesque, if not of the profane. We can trace the same idea at St. Gall in the tenth century, where a student, on the thirteenth of December each year, enacted the part of the abbot. It will be sufficient here to notice that the continuance of the celebration of the Feast of Fools was finally forbidden under the very severest penalties by the Council of Basle in 1435, and that this condemnation was supported by a strongly-worded document issued by the theological faculty of the University of Paris in 1444, as well as by numerous decrees of various provincial councils. In this way it seems that the abuse had practically disappeared before the time of the Council of Trent.


There, at least, is a proper Saturnalia connection.  It probably looked like this story from a Texas memory.  I don't have the whole story typed up, but I used this condensed version of it a few years back:

The opening sentence of "Looking Back on Christmas" by William Owens.  I don't know if it's memoir or fiction, but it's become one of my favorite Christmas stories.   It's the story of a family gathering in rural Texas on Christmas Eve.  The family gathers, then sits down to dinner, and after dinner:

While we went through the firecrackers he had given us, the men made a trip back to the kitchen.  This time they brought the jug with them and set it in the back end of a wagon.  They brought out more fireworks, and Monroe had the sack of powder in his coat pocket.

In no time at all, five guns were blazing away at the gate, and the little children were running for hiding places under the house.  I shivered at the sound, but felt safe, for their backs were to us and
they were aiming at the gate.

The gate was "a wide, heavy gate made of oak timbers fourteen feet long and an inch thick."  However, the next morning:  "We went to look at the gate, and found it half hanging from the posts, with the timbers drilled and splintered by shot."  The story ends this way:

Sometimes you don't know to know anything about history to get the sense this is the time of year for some serious fooling around.