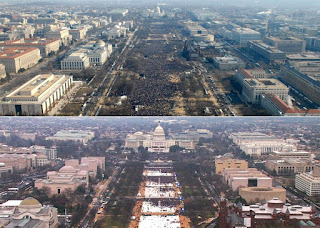 "Mothers and children trapped in poverty in our inner cities, rusted out factories scattered like tombstones across the landscape of our nation, an education system flush with cash, but which leaves our young and beautiful students deprived of all knowledge, and the crime, and the gangs, and the drugs that have stolen too many lives and robbed our country of so much unrealized potential. This American carnage stops right here and stops right now."


It seems to be a nation only Trump can see.  I can't wait for his State of the Union Address.  Imagine what he thinks that is.

“I thought the speech was great,” John Falk, a biometric salesman who traveled 22 hours by bus from Cincinnati to New York City to Washington, D.C., to attend the ceremony, told TPM. “I liked that he sounded presidential, inclusive.”

“He didn’t say the “I” word once,” said his friend Dino Roscigno, who described himself as an “actor, director and security guard” from New York. “That’s more than I can say about a certain someone I can think of.”*

“He was magnanimous,” Falk continued. “He thanked Michelle and Barack Obama for the smooth transition when in reality we know it was much rockier than that.”

“He could’ve criticized those Democratic lawmakers who didn’t come and he didn’t,” Roscigno added.

“It was more statesmanlike,” Falk said. “I hope it’s a sign of things to come. He always has the Twitter bomb and he can pull out that weapon if he needs to, but I hope this is a sign he’s ready to assume the mantle, the weight of the job.”


*Perhaps; I haven't checked yet.  But there are several other things the President didn't mention, either.