The flying fickle finger writes, and having writ.... 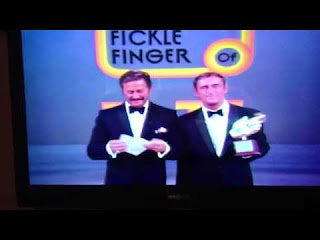 Like the amusement park rides where you have to be "This Tall" to ride, you probably have to be at least this old (your humble narrator's age) to remember "Rowan & Martin's Laugh-In."  Even the idea of adding "In" to something* to make it hip dated so fast it died with that show which was, at the time, cutting edge TV comedy.  Where is it now?

Anyway, one of the wonders of digital broadcast is that it creates a number of apparently cheap-to-broadcast channels that are filled with all manner of broadcast specific offerings, most of them re-runs.  One one such channel the other night I caught the "Laugh In" episode where they introduced what would be a running gag for 5 years and one of the cultural bequests (that lasted slightly longer than the show) of "Laugh In":  the Flying Fickle Finger of Fate award.  And who was the recipient of this first dubious achievement award?

The U.S. Congress, for ignoring the wishes of 200 million Americans, and failing to pass a gun control law.  In 1968.

I'm ceaselessly bemused by Millenials and Gen X'ers on the intertoobs who seem to think the world was a paradise until shortly before they became aware, who are sure the past was simple and uncomplicated and only the present is the problem, a problem that would be solved if only the DNC hadn't conspired against Bernie (but the allegations of Russian interference are a government conspiracy because you can't trust the government!) or if only Barack Obama had been FDR redux or if only Nancy Pelosi had turned power over to Keith Ellison or...

Well, there's always an "if only" that would return us to pre-millennial status when all was well and nothing went wrong and the Congress was admired rather than derided and despised and locked in hopeless partisan squabbles.  It's fun to watch TV from 50 years ago, especially if you remember 50 years ago, because it reminds you that the French are right:  the more things change, the more they remain the same.

*There were "love-ins," there were even "be-ins."  Nobody ever knew what that last one was.  Yes, they were halcyon days to be "in."  Don't laugh, Millenials; your day is coming.