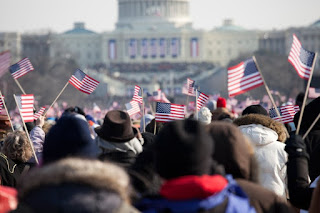 Actually, Obama's inauguration 8 years ago; but Trump
is using it as the background for the POTUS Twitter feed
because turnout for his inauguration was "Sad!"

Don't think of a liar?

First, I don't think the word "landslide" means "any electoral victory."  Besides, Bush beat Dukakis 428 to 111 in 1988; and George W. Bush defeated Kerry by 35 electoral votes in 2004, just two fewer votes than the margin between Trump and Clinton.

Counties?  Who are we kidding?  Why not count by municipalities, or polling districts? Yes, Trump won 62 million votes in the popular vote, but Clinton won 65 million.  And yeah, Bush never cracked 300 electoral votes in winning the White House twice, but again, no Republican other than W. won the White House between 1988 and 2016.

This is the story the President wants to tell about himself, to the world.  Which has to have the whole world thinking:  "How insecure IS this guy?"  Making our allies tremble, and our enemies chuckle.

And have you seen the pictures of the inaugural parade?

Nothin' but good times ahead!