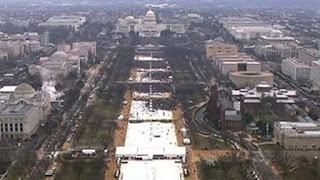 You gotta problem with so much whiteness?

No, ultimately, crowd size doesn't matter.  Trump is POTUS, whether 5 million turned out around the world in protest, or whether only 150,000 turned out to see him sworn in.

Though you could ask yourself how many people rode Metro for similar occasions, it still doesn't mean Trump is not the President of the United States.

It's the lies that matter.  Same as it ever was.  The lies behind Watergate, behind Iran-Contra, even behind the Gulf of Tonkin incident.  It's never quite the facts that matter; it's what's said about the facts, that matter.

And there are no alternatives to facts; there are only lies about them.