“Some sort of institutional collapse, then you just lose shipping—" 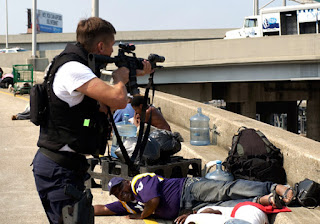 I heard the author of this article interviewed on "Fresh Air," and he directly connected this new angle on "survivalism" to the election of Donald Trump; but that sounds like an easy retrojection to me, an anachronism invented by very recent events.  It's easy to point and laugh at "survivalists."  And it doesn't matter whether they are militia men in backwoods Idaho or super-rich in Silicon Valley:  either way, it's so stupid.  Remember the stories about the chaos in the SuperDome in New Orleans following Katrina?  Turns out it didn't happen that way at all.  Turns out the worst, the most inhuman responses to that flooding were the communities around New Orleans blocking bridges with armed police, forcing the suffering residents of New Orleans to keep suffering.  There was no apocalypse in NOLA, except the revelation that the people not involved in the crisis were terrified by their own fears of a breakdown in social order.

Consider Syria:  by all accounts, social order there is non-existent, as three groups vie for power and stomp flat everything, and everyone, between them.  Neither the rebels nor the government nor ISIS is concerned with the lives of the people living in Syria:  all they want is power.  Surely a post-apocalyptic scenario if ever there was one.

And yet reporters still manage to get in and out of Syria and talk to ordinary people whose stories will break your heart.  Ordinary life persists amid chaos; even the flow of refugees into Europe, while disruptive, is orderly.  There is no Mad Max flight out of the desert, no spreading wave of chaos undermining civilization as it eats at the foundations of social order.  There are simply people viciously fighting (the real nightmare scenario, and all of them supported by, and using the very tools and institutions of, civilization), and people seeking civilization.

And then there are the survivalists, who imagine owning real estate or Bitcoin after the "apocalypse" will somehow put them in good stead.  And not surprisingly, this is all mostly fed by movies:

“Ever since I saw the movie ‘Deep Impact,’ ” he said. The film, released in 1998, depicts a comet striking the Atlantic, and a race to escape the tsunami. “Everybody’s trying to get out, and they’re stuck in traffic. That scene happened to be filmed near my high school. Every time I drove through that stretch of road, I would think, I need to own a motorcycle because everybody else is screwed.”

The words of a man who's never suffered want or deprivation on the scale of people living in poverty in America, much less of people living in poverty in the truly beleaguered parts of the world; or lived through the refugee horrors of Syria, or even Europe in World War II.  That's the funniest, saddest part of survivalist fears:  it's the privilege of wealthy white Americans afraid of losing their privilege. It's a fantasy, constructed on a fantasy, founded in a life most of the world would consider a fantasy.

Of course, there's a simple alternative to this:

“Twenty-five hedge-fund managers make more money than all of the kindergarten teachers in America combined,” he said. “Being one of those twenty-five doesn’t feel good. I think they’ve developed a heightened sensitivity.”


Let that sink in for a moment.  Think of the movies from the '30's where the rich guy is out of touch with the common man, and if he learns his lesson, the common man is perfectly comfortable with the rich guy's wealth, as it's attitude that counts. Is that the community we need to rediscover?

Johnson said, “If we had a more equal distribution of income, and much more money and energy going into public school systems, parks and recreation, the arts, and health care, it could take an awful lot of sting out of society. We’ve largely dismantled those things.”


Yes, we have, but why?  Maybe it has something to do with something more fundamental to the American experiment (because survivalism seems to be a peculiarly American pursuit).  Something like this, perhaps:

So, what I have decided, and I'm not going to let you vote on this (laughter) I have decided that the Jesus movement, the earliest Jesus movement is essentially a protest against the economy of extraction and the proposal and practice of an alternative economy.  And I get that because if you look in – well, I don't know if you know the Letter of James but the Letter of James, the lead apostle, is filled with warnings about the love of money which in context means don't sign on with Rome.  But in the Epistles of Paul, in Galatians, I think it's chapter 5, Paul has a list of what he calls the desires of the flesh are greed, lust, fornication, licentiousness, quarrelsomeness, which I think names – if accumulating more money is the goal of your life, that's the kind of society you will get and that's the kind of society that we have.  So I have come to think, --- you won't mind if I say this since the Cowboys have been winners lately – (laughter)  that the NFL is basically the liturgy for that society.  The NFL is all about sex, money, and violence and they now say the NFL's slogan is “We own Sunday”. (inaudible)    Paul answers desires of the flesh with a list of the fruits of the Spirit, love, joy, peace, humility, kindness, patience.  These are the kinds of habits that will not be developed if our commitments are to the competition system.  They are habits that are only viable if we come to regard, if we come to practice solidarity with all our neighbors.


There is always the response of philanthropy.  But while Andrew Carnegie built some fine libraries and John D. Rockefeller established the University of Chicago, what have they done for us lately?    Giving away money is still participation in the competition system.  It's a nice gesture, but it doesn't change anything:  it doesn't foster love, joy, peace, humility, kindness, patience.  It just allows a little of the wealth to trickle down more directly.  It doesn't direct anyone away from the goal of accumulating more money.  Perhaps the solution is not trimming the branches on the tree of evil, but getting down to its root.