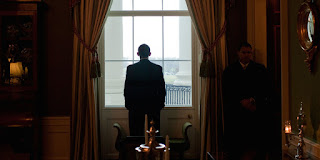 The Greek concept of tragedy was based on their cosmology.  For them, creation was a matter of logos, but not the logos John referred to in the opening of that gospel (close, though!).  Logos as reason, not just as word.  Logos, reason, imposed order on chaos, and thus the cosmos as we know it arose.

Problem was, logos was not that tight a lid on chaos.  Christians wrestle with the problem of evil; the Greeks wrestled with the problem of unreason.  When things went wrong, it was a failure of logos; it was an irruption of chaos.  Reason did all it could, but it could fail.  When it failed in tragic heroes, tragedy resulted.  When it failed in human affairs, chaos resulted.  Chaos was never defeated, but only controlled, only quelled.  The lid stayed on by the efforts of reason, and chaos stayed in the background.  But eventually, in the last tragedy of all, logos would fail, and chaos would reclaim its supremacy.

Call it another reason Plato was pessimistic about the viability of democracy.  It's not really part of Plato's argument, but like the elegiac in Old English literature that still sounds in the best British and American literature today (think of all the glories of the past on Tolkien's Middle Earth, gone, long gone, and never to return; and even when they do, Aragon's rule, too, will fade), it's somewhere in the background of Plato's reasoning.

So now comes Charlie Pierce to lament the rise of Trump and the departure of Obama, and he says, in his summing up:

But the one thing he never did—and the fact that his political opposition is so contemptuous of his personal style is proof enough that he was right—was to turn the office into what his successor apparently intends it to be: an endless celebration of nothing. On his last day, despite all the interviews he's given about how his faith in the American people has grown stronger, it's hard to believe he doesn't look out the windows of the White House now and wonder if he truly understood the country and its people at all. It is the last day he will be President of the United States, a once-great country that doesn't understand itself.

Obama understood the people, and he told them what they wanted to hear.  Trump did the same thing, but he managed to gain control with less than a majority of the country, and his support is going down.   Not that the support of the people means that much:  Obama had support of 90% of the country after the Newtown massacre, but he couldn't do anything with it.  Our system doesn't work that way; it never has.  That Trump won the White House, though, and Obama leaves more popular than Trump comes in, doesn't mean support for Obama or the Democrats is going up.  That's the zero-sum game Hillary Clinton played and lost.  Disgust with Trump didn't translate into support for Clinton, and Trump's victory hardly means he's got the whole country in his hands.   The system doesn't work that way; it never has.

Still, the ancient Greeks had a better handle on it, though the Christian doctrine of original sin isn't inapplicable, either.  The way to understand the "American people" is to understand that:  the one thing that joins us is not nationality or patriotism or heritage or tradition.  We all have different understandings of those terms. What joins us is a concept of sin, or the nature of chaos.  In either one, reason fails, and trouble results.  Our institutions have never been able to make us do what we don't want to do, and have never been able to save us from ourselves.  We started with a compromise on the "peculiar institution" of slavery, and it took a war to end it.  We made no effort to right that wrong for another 100 years, and the past 60 years have been marked by the refusal to accept that promissory note Dr. King spoke about in 1963.  This country was formed with its own version of chaos, rooted in slavery from the arrival of Columbus, and we haven't managed to eradicate that sin with words, yet.

This country has never understood itself, and it never will; not until it hears the words of Jeremiah Wright, quoting a U.S. Ambassador, that the chickens truly come home to roost, and we are responsible for what we have done in the world.  It wasn't Obama's place to be our national preacher and tell us those truths.  He was right to praise the strengths of the American people; as right as Trump is wrong to peddle lies.  But humankind cannot bear very much reality, especially from its President.  And if the chaos does overtake us someday, well, it will be on us.  There will be a certain inevitability in it, a certain justice.  And it will be because we thought too much of ourselves; and too little.