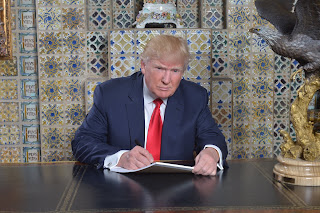 Like the President-to-be, you can envision me hard at work....

I wanted to highlight this bit from Dr. King's speech:

The crowning achievement in hypocrisy must go to those staunch Republicans and Democrats of the Midwest and West who were given land by our government when they came here as immigrants from Europe. They were given education through the land grant colleges. They were provided with agricultural agents to keep them abreast of forming trends, they were granted low interest loans to aid in the mechanization of their farms and now that they have succeeded in becoming successful, they are paid not to farm and these are the same people that now say to black people, whose ancestors were brought to this country in chains and who were emancipated in 1863 without being given land to cultivate or bread to eat; that they must pull themselves up by their own bootstraps. What they truly advocate is Socialism for the rich and Capitalism for the poor.


Because it goes directly against the current grain of the "rugged individual" and the "self-made man" which is part of the mythos of America  I am sick to death of hearing from people in the West who think they settled it all with their own two hands and a Colt revolver.  Without the land grants they were given to move across the Mississippi and head for the California coast, much of that area might still be controlled by Spain.  Without massive government support, the transcontinental railroad would still be a pipe dream.  Without all the things Dr. King mentions, the West might be even less inhabited than it is now.  And so much of California's prosperity is based on federal government spending it isn't even funny.

They were provided with agricultural agents to keep them abreast of forming trends, they were granted low interest loans to aid in the mechanization of their farms and now that they have succeeded in becoming successful, they are paid not to farm and these are the same people that now say to black people, whose ancestors were brought to this country in chains and who were emancipated in 1863 without being given land to cultivate or bread to eat; that they must pull themselves up by their own bootstraps.

I watched this show the other night, a laudable effort by Houston Public Media (NPR/PBS) to discuss the race issues of the fourth largest city in the country.  It was excellent, and telling.  The small panel in the visual on the website listened to, and responded to, answers to questions by two other small groups (six each) of white and black Houston residents.  The differences between the groups were telling, but none more so than the discussion of "affirmative action."

As one of the panelists pointed out, President Kennedy coined the phrase rather inadvertently when he issued an executive order that government contractors "take affirmative action to ensure that applicants are employed, and employees are treated during employment, without regard to their race, creed, color, or national origin."   It's the same concept King is getting at there; and the distinction is in something else the panelists mentioned:  Dr. King promoted integration; but his followers, after his untimely death, settled for de-segregation.

The difference haunts our efforts at facing racism to this day.

The white group each affirmed the idea that everyone should be treated equally, but all equally rejected the idea that this equality should be achieved by any action or any redress.  Their attitude was that of the Republicans and Democrats Dr. King addressed:  now that they are successful, people who were finally released from slavery 150 years ago, after 400 years of that peculiar institution dominating this country, should pull themselves up by their own bootstraps.

The way the ancestors of the current residents of the American West did.

We are profoundly divided on this issue because to face it squarely would mean to take a responsibility we, the white people of America, just don't want to take.  At the extreme this is the attitude of Dylann Roof, who thought his power would be stripped from him by black Americans.  Of course, Dylann Roof didn't have any power, so his impotent but murderous attack was not the response of the people interviewed by Houston Public Media.  More secure in their power than Mr. Roof was in his, they argue not for radical change to protect them, but for the status quo, to ensure them a comfortable end to their material existence.  The difference is profound, but the distinction is a fine one.

In an interesting programming choice, the PBS documentary "The March" followed the broadcast of  "Houston in Black and White."  I also recommend it, if you've never seen it.  The March on Washington was secure and successful only in retrospect.  At one point President Kennedy tried to dissuade Dr. King from the whole operation, on the basis that the FBI was reporting King's organization (and the others involved in the planning of the March) were infiltrated by Communists.  Which sounds like the paranoia of J. Edgar Hoover, until you remember the responses to the "Black Panthers" and consider the reactions to Black Lives Matter.

One of the things many of the participants, in the groups as well as on the panel, agreed on was that we must first put our house (whose house?  Don't worry about the details....) in order before we address the problems we have with others.  It's a comforting notion, this idea that we can set all our affairs straight and THEN address our relationships to others.  But it never works out that way.

In one sense, that argument is like Kierkegaard's swipe at Hegel; Kierkegaard imagined a man who became so abstracted from his own personal existence, so lost in the idealism of Hegelian thought, that he found one day he had died, and never realized it.  It is a comforting ideal to say "Once I am fine/perfect/comfortable, then I can take on my relationship with others," but you can no more abstract yourself from relationships with others than you can abstract yourself from your own existence.  And yes, I see that as the fundamental problem of the stereotypical "independent" Westerner:  a person so independent of others he dissociates from himself, and finds one day he's no longer alive, no longer human.

Auden was right:  we must love one another, or die.

We can't put "our house" in order without putting our world in order.  It is tempting to agree with Candide that we much each tend our own garden, but that only makes us gardeners, it doesn't make us community members.  We must take care of each other, or no one is taken care of; and we must begin with the other, and not with the self.

To put it in concrete terms, the rejoinder to the claim we must set our house in order first, we must take care of ourselves first, is the story of Elijah and the widow:

Yes, it's the story of a miracle.  Yes, it's a story of faith, if you understand faith as "trust," not as some abstract concept relating an individual to God.  Elijah trusts the word of the Lord, and the widow trusts Elijah.  "But first," Elijah tells her; "but first make me a small cake...and after that make something for your son and yourself."  Had she not, she and her son would not have survived the drought; nor would Elijah.  The sensible thing for her to do was to insist she had nothing to share; because she wouldn't have.  But she didn't do the sensible thing, "and there was food for him and for her family for a long time."  It is a lesson in faith.  It is a lesson in hospitality.  It is a lesson in who you should take care of first.

Which is what Dr. King was talking about.  We set up systems:  systems of law, systems of economics, systems based on geography and social structures, and we say those systems will save us, preserve us, protect us; that if we only take care of the system first (family, friends, neighbors, wherever the boundary lines are drawn), then we can later take care of others.  We put our trust, our faith, in those systems.  Every time those systems fail and we insist they have not failed, they have only been failed.  Our trust, our faith, is truly blind, which is why we lash out at religious believers for their "blind faith."  Every time, we see in the world the reflection of ourselves, and call that the Big Idea the can never Fail.

Of course, if we put the other first, elevated the least and lowest and sent the first to the end of the line, if we tried first to take care of others so that all would be taken care of equally; what then?

Truly the more things change, the more they remain the same.  Unless we change them at the root; at the radix; unless we become radical.