To the Unknown Immigrant 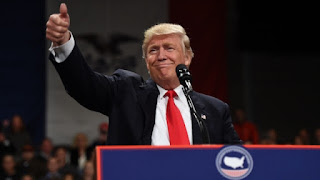 If anything was wrong, Trump would certainly have heard....

Reince Priebus  and Kellyanne Conway insist we should remain calm, that all is well.

Meanwhile, no one can find Dory:

Some were turned back from boarding their flights, others were handcuffed in airports, patted down and interrogated on their political beliefs. Mothers, fathers, children, students, employees suddenly found that the unthinkable had happened. They had been banned from returning to their jobs and studies, to their families and homes because they were Muslims.

The thought was almost too evil, too grotesque, to countenance. The hours after the ban felt like living through a chapter of history that we’d left behind. Events unfolded the likes of which we had only ever seen in documentaries, in fragments of newsreels from the archives. Travellers in tears, stern officers “just following orders”, refugees on the cusp of safe harbour wild with despair at the uncertain fate to which they must return, confused children huddled behind their parents as they plead with authorities, their faces speaking of fear, confusion and the sense that something is about to change for ever.

And something has. The Islamophobia that we have witnessed rise over the past decade has finally burst its banks. The first thought was that surely common sense would prevail, surely there would be some grace period, surely there would eventually be a challenge from some sensible authority that would stop the madness. None of these things came to pass.

Turns out, a lot of people travel to and from America, for work.  Turns out a ban on travel could have major economic consequences.  Who knew?

The Institute of Directors (IoD) and the British Chambers of Commerce (BCC) both agreed the ban would be bad for business while Sir Martin Sorrell, the head of advertising group WPP, expressed concerns about the effect on his workers and their families and said he had an “instinctive dislike” of such measures.

Sorrell, who has offices in New York as well as London, the far east, India and Australia, said he was not aware of any immediate effect of the ban on his staff, but added: “We are concerned about the impact it may have on our people and their families both inside and outside the USA and on innocent people generally.”


Innocent people?  Kellyanne Conway insists a little inconvenience is good for you!

“325,000 people from overseas came into this country just yesterday through our airports,” she said on Fox News Sunday. “You’re talking about 300-and-some who have been detained or are prevented from gaining access to an aircraft in their home countries and must stay for now. That’s 1 percent, and I think in terms of the upside being greater protection of our borders of our people, it’s a small price to pay.”
....
Conway suggested that the order is fair because her own travel was slowed down after the 9/11 terrorist attacks. “I was stopped many times after 9/11,” she said. “I didn’t resemble, or share a name with any kind of conspiracy, but this is what we do to keep the nation safe.”

Of course, she doesn't ever say she was detained without charge and denied access to a lawyer, but I guess all inconveniences are the same, huh?

While this has caused chaos around the world this weekend,  don't blame the newest occupant of the White House:

“Our country needs strong borders and extreme vetting, NOW,” the president wrote. “Look what is happening all over Europe and, indeed, the world – a horrible mess!”


And yes, this mess hits close to home:

In 2015, Texas received more refugees than any other US state, despite attempts by its Republican leaders to foment a hostile atmosphere. Last September, the governor, Greg Abbott, announced Texas would pull out of the federal refugee resettlement programme, citing safety concerns.

“I never have been in a situation since I came to the United States that someone told me, ‘You’re not welcome here,’” Alsaadi said. The president’s ban, he thinks, “doesn’t make any sense” – least of all for immigrants who put their safety on the line in the service of American interests.

“Is that the favour that [Trump] can return to them?” Alsaadi said. “It’s kind of hard to believe where things are going right now.”


Besides:  remain calm!  All is well!

America is a proud nation of immigrants and we will continue to show compassion to those fleeing oppression, but we will do so while protecting our own citizens and border. America has always been the land of the free and home of the brave. We will keep it free and keep it safe, as the media knows, but refuses to say. My policy is similar to what President Obama did in 2011 when he banned visas for refugees from Iraq for six months. The seven countries named in the Executive Order are the same countries previously identified by the Obama administration as sources of terror. To be clear, this is not a Muslim ban, as the media is falsely reporting. This is not about religion - this is about terror and keeping our country safe. There are over 40 different countries worldwide that are majority Muslim that are not affected by this order. We will again be issuing visas to all countries once we are sure we have reviewed and implemented the most secure policies over the next 90 days. I have tremendous feeling for the people involved in this horrific humanitarian crisis in Syria. My first priority will always be to protect and serve our country, but as President I will find ways to help all those who are suffering.

This is all the media's fault!  Damn the press for reporting on what Rudy Giuliani said!

“When he first announced it, he said ‘Muslim ban,’” Giuliani said in a Fox News interview. “He called me up and said, ‘Put a commission together, show me the right way to do it legally.’”

The virtually unprecedented sight of members of the legislative branch of U.S. government trying with little success to enforce orders from the judicial branch against the will of the executive branch has already prompted some to suggest that Trump’s executive order is sparking a constitutional crisis.

They know exactly what they're doing:

Even Trump’s chief of staff, Reince Priebus, on Sunday contradicted himself in stating whether the ban applied to permanent residents. He first told NBC’s “Meet the Press” that “as far as green card holders moving forward, it doesn’t affect them.” But minutes later, he said, “Of course it does.”


If anything was wrong, Trump should certainly have heard.