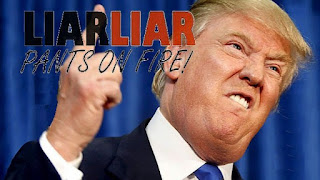 You know, there isn't really any reason to work out a strategy to "deal" with this:

MUIR: What you have been presented so far has been debunked. It has been called false.

TRUMP: Take a look at the Pew reports.

MUIR: I called the author of the Pew report last night and he told me that they found no evidence of voter fraud.

TRUMP: Really, then why did he write the report?

MUIR: He said no evidence of voter fraud.

TRUMP: Excuse me, then why did he write the report? According to Pew report, then he’s groveling again. You know, I always talk about the reporters. They grovel when they wanna write something that you wanna hear, but not necessarily millions of people wanna hear or have to hear. *


The President is a liar; plain and simple.  He deals in a world of fantasy, of conspiracy theories, of picking his own "facts", not in the alternative, but simply because he prefers them.  It doesn't matter that he's risen to the highest office in the land, or that he was "brilliant" in his campaign, or that he voiced the voice of the voiceless.

*The Pew report in question focussed on voter registration rolls which still contained the names of dead people and people who had moved.  I've relocated from the state of Texas once in my life, and registered to vote in other states.  I re-registered when I returned to Texas, but never told the Secretary of State of Texas that I had decamped; nor did I notify the other states when I registered here again.  And of the many duties I had as executor of my father's estate, notifying the Registrar of Votes of his passing was not one of them.  Trump isn't even talking about voter fraud.  He's just making things up because he likes it that way.  There's a word for that.