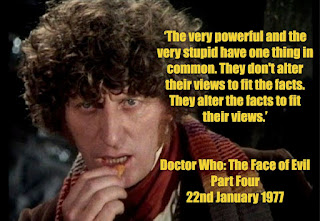 Of course, we can still argue about what the facts are....

There's going to be a lot of this going around:

There are many who hope Trump’s supporters will hold him accountable. That they will insist he fulfill his promises about jobs or universal health coverage—and when those promises are broken, that their fervent support will turn into rage at having been duped, causing Trump anguish and eventually costing him re-election.

When people make big bets on miracle cures that fail to work, they rarely turn against the treatments or their merchants.

This is wishful thinking. Trump’s rise to power has followed a similar trajectory to that of quacks who peddle panaceas to the desperate—a bizarre and heartbreaking world I’ve long studied. Just like them, Trump will fail to deliver. But his supporters will find a way to exonerate him. Consider the ability of one “Archbishop” Jim Humble—a former gold prospector who claims extraterrestrial lineage—to persuade parents to pump their autistic children full of Master Mineral Solution, even though MMS, when activated by citric acid, becomes a dangerous form of industrial bleach. Or “Gerson” therapy evangelists, who talk cancer patients into paying thousands to detoxify with organic juice at a Tijuana, Mexico, clinic, despite studies showing the therapy is ineffective (unsurprising given that it was developed not by oncologists, but an early 20th-century Viennese doctor named Max Gerson as an unsuccessful tuberculosis treatment).

When people make big bets on miracle cures that fail to work, they rarely turn against the treatments or their merchants. Instead, they rationalize their misplaced faith, in order to save face, remain hopeful, and preserve an identity that’s defined by their courageous ability to reject the status quo.

Vague and glittering gernarlities based on the personal experience of the author:

Who, after weighing all the evidence, could actually take them seriously? Only credulous fools, right?

I used to think so, until about a decade ago, when my father called to ask if I knew anything about “zapping.”

And based on the creation of a phrase that sounds vaguely academic and therefore respectable in the right circles; in this case, "epistemic uncertainty."   When really, the simplest answer is, as ever, the best:

Donald Trump requires constant and undiminished reinforcement of his greatness.

And why do people buy what Trump sells?  Because there's a sucker born every minute.  Does this portend some sea change in American politics, though?  Don't we need to convert Trump supporters into rational beings like ourselves?

For one thing, Trump has the lowest approval ratings ever recorded, and this during his "honeymoon period" when he hasn't yet had a chance to disappoint anyone.  He's got nowhere to go from the inauguration but down, and he's already there.

Trump won the electoral college while losing the popular vote by a 3 million vote margin. Yes, that's the system, but in no other democracy in the world would the popular vote winner lose the election, and if that did happen, the results would be regarded as a wholly undemocratic action.  Which is not to say Trump is "illegitimate" in the technical sense of not truly having won the race according to the rules; it is to say the electoral college renders an illegitimate result.  But those are the rules and we are stuck with them.

We still fancy ourselves a democracy, though, and the President still serves at the behest of the people.  But Donald Trump doesn't want to be President; he wants to be reminded of his greatness.  Constantly.

And only about 30% of the people, by the best measure we have, wants to reinforce that greatness.  Trump doesn't represent a sea change in our politics; he is the result of a breakdown, coupled with an archaic system designed to bring slave-holding states into the union they would try to break less than a century later.  He is a fluke, a design flaw, a kink in the system.   He was not elected by a nation of credulous fools; he was elected by a basic error and a system meant to represent, not actually produce, representative democracy.  Trump's victory is a result of that system.  It was meant to protect the power structures established by the Constitution, but no system can function so perfectly as to never produce the antithesis of what it was designed to create.  Now the system meant to reinforce and stabilize power has produced a person determined to use that power to destabilize and disrupt the system.  Fortunately the system is too redundant, resilient, and occupied by opposing forces for one person, or even one Administration, to tear it down.  But having relied on the system for too long to take care of us, we find ourselves on the short end of the national stick.

As ever, we have met the enemy, and he is us.  Not us the Trump supporters; us the complacent who refused to vote because we didn't like the choices; or refused to vote because we saw conspiracies in every e-mail delivered by Wikileaks; or we just thought no one could be stupid enough to vote for Donald Trump, so why bother ourselves?  You can't begin to exhaust the excuses, but don't be fooled:  this didn't happen because of "them," it happened because of us.  It happened because, like Trump, we want to be reminded of our importance constantly.  Failing that constant stroking, why should we vote for the lesser of two evils?  Why should we vote for a candidate we don't really like, don't really care about, don't really trust?  Isn't this whole democracy thing about how we feel?

It was that attitude the "Founding Fathers" feared above all things.  That's why they warned us about creating political parties.  That's why they created an "electoral college" so the Presidency could never be a plebiscite.  And that's why we have a raging man-child narcissist who has to rant about the size of his inaugural audience and send his minions out to lie about it.

So while a stunned nation hashes and rehashes What It All Means®, I’m particularly hung up on this one fact:

The President of the United States forced his spokesperson to lie to the American people about how many people watched his inaugural.

This stupid, petty, in-the-grand-scheme-of-things meaningless thing was THAT important to him. He is supposed to be the leader of the free world focused on, you know, important stuff. But he forced his spokesbot to tell an obvious, easily checked lie about how many people watched his inaugural. It is that important for Trump. He must have the biggest, the best, the most, the (fill in the blank superlative), and yes, he will die on this hill. What little political capital he had was squandered on something stupid like crowd size because Trump demanded it.

Just let that sink in for a minute. It’s just … astonishing.

Does she exaggerate?  Not according to Trump's Press Secretary:

"He keeps getting told what he can't do by this narrative that's out there. And exceeds it every single time. And I think there's an overall frustration when you turn on the television over and over again and get told that there's this narrative that you didn't win, you weren't going to run, you can't pick up this state," he said. "Over and over again there's this constant attempt to undermine his credibility and the movement that he represents. And it's frustrating for not just him, but I think so many of us that are trying to work to get this message out."


The morning of day 3 of the new Administration, and that's where we are.  And it really doesn't matter if we can convince the hardest core Trump supporter that this is not a good place to be, because we are there regardless.    And we are the ones responsible for it.  Which means we are the ones who can fix it.  Not "them," those "Trump supporters;" us; you and me.

This is still a democracy, after all.