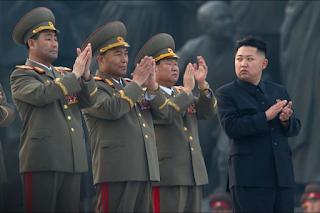 Any resemblance to the PEOTUS's first press conference is purely coincidental....

BBC World Service tells me the CIA (at least) has had the allegations about Trump's activities in Moscow (and the alleged videotapes, etc.) for at least a year, and considers the information "credible" enough to report it to the highest levels of security clearance, which I assume means at least the POTUS, but a rarified atmosphere of government officials, to say the least.

The CIA does not regard the allegations as proven, or true; but credible.   Credible enough that the most important people in government need to know about them.

Let that sink in for a minute.

Consider how vehemently the President-Elect attacked the intelligence agencies of the United States government:


Because, after all, he and Putin see eye-to-eye:

TRUMP: Well, you know, President Putin and Russia put out a statement today that this fake news was indeed fake news. They said it totally never happened.

Now, somebody would say, “Oh, of course he’s gonna say that.”

I respected the fact that he said that.


So Vladimir Putin is someone we can all trust, but our own intelligence agencies might as well be working for Nazi Germany.   And really, why wouldn't Putin now release information he could use to blackmail Trump with later?

This is probably my favorite exchange in the press conference:

QUESTION: Would a reasonable observer say that you are potentially vulnerable to blackmail by Russia or by its intelligence agencies?

TRUMP: Lemme just tell you what I do.

When I leave our country, I’m a very high-profile person, would you say?

And I always tell them — anywhere, but I always tell them if I’m leaving this country, “Be very careful, because in your hotel rooms and no matter where you go, you’re gonna probably have cameras.” I’m not referring just to Russia, but I would certainly put them in that category.

And number one, “I hope you’re gonna be good anyway. But in those rooms, you have cameras in the strangest places. Cameras that are so small with modern technology, you can’t see them and you won’t know. You better be careful, or you’ll be watching yourself on nightly television.”

I tell this to people all the time.

I was in Russia years ago, with the Miss Universe contest, which did very well — Moscow, the Moscow area did very, very well.

And I told many people, “Be careful, because you don’t wanna see yourself on television. Cameras all over the place.”

And again, not just Russia, all over.

Does anyone really believe that story?


I know what question he's asking; but the question applies to his answers, too.  Because you can't make this stuff up:  crime is bad, except when it's good:

But remember this: We talk about the hacking and hacking’s bad and it shouldn’t be done. But look at the things that were hacked, look at what was learned from that hacking.

Can you imagine that if Donald Trump got the questions to the debate — it would’ve been the biggest story in the history of stories. And they would’ve said immediately, “You have to get out of the race.” Nobody even talked about it. It’s a very terrible thing.

He's going to take an oath to preserve, protect, and defend what, now?

And frankly:  how sad is it that the PEOTUS needs a cheering section in order to hold a press conference?