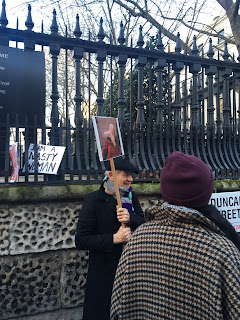 Twitter doesn't love me anymore, as it won't let me embed tweets any longer.  No matter, the text is what matters:

Wow, television ratings just out: 31 million people watched the Inauguration, 11 million more than the very good ratings from 4 years ago!


Really?  The POTUS is spending his first two days in office obsessing over his inaugural?

Watched protests yesterday but was under the impression that we just had an election! Why didn't these people vote? Celebs hurt cause badly.


And the latest is how you know the staff is still taking the Twitter account away from him when they can:

Peaceful protests are a hallmark of our democracy. Even if I don't always agree, I recognize the rights of people to express their views.


And none of these are from the POTUS account.  Trump can't give up Twitter, even now that he's won; just like he can't give up fighting with the idea that there is anyone anywhere in the world who doesn't recognize his greatness.

Honestly, for reasons I'll put in another post, I give him two years.  If the country doesn't vote in a Democratic House and Senate just to impeach the guy (a long shot, even with Trump in the Oval Office), I'll still give odds he quits before his first term is up.  But until then, this is going to be the continuing theme:

It's all about "respecting" the President.  If he can't have that, he can't function.  Well, I can respect the office (though not revere it); but I cannot respect the current holder of the office.  If Trump wants that, if Trump needs that, if Trump demands that, it is up to Trump to earn it.  So far, all he's done is complain about how much respect he doesn't think he's getting.  It is unseemly for a 76 year old man to throw such a continuous public temper tantrum.

And he needs to follow the laws and the Constitution to earn that respect, too.  It may be Trump has already violated the Presidential Records Act.  It's not a firing offense, but considering how much hell he gave Clinton about alleged violations of law and deleted e-mails, shouldn't we uphold the law, not ignore it?  If Trump has no respect for the law, why should we have any respect for him?*

*And honestly, they just don't understand what they are doing:

Top Trump advisor Kellyanne Conway said in a Sunday interview that people expect the President "always to be the bigger man."

"It's when people attack him and then they wait to see what happens," Conway said in an interview on "Sunday Today."

She described Trump as a "counter-puncher," and said he has the right to "defend himself and clear the record."

"But at the same time, he swallows a great deal and looks the other way," Conway said. "And I just think we should give him a chance."

So Putin just needs to stroke Trump to get what he wants from him, and the rest of us need to salute the Commander in Chief to keep him happy and make him think he's always "the bigger man," because he needs the chance to show he can look the other way, even though a word in an interview with John Lewis is enough to send him on a three day rant, and a report from the government he now heads about crowd size is enough to send three of his employees out to the press to call them all liars.

As my wife said:  we've elected a narcissist to the office.  God help us all.