"I will show you fear/In a handful of dust" 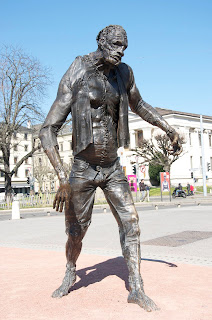 First, read the book; don't rely on someone's analysis or even precis of it.

That said, my summary of the book would be quite different from Jacob Brogan's.  Then again, Brogan is using a very old literary form in his essay:  the dialogue.  It's a form that finally died out sometime in the 18th century, replaced briefly with the epistolary form (Kierkegaard used the latter in his Either/Or.).  That form made the modern novel popular, and it's relevant to a discussion of Frankenstein because that's the form of Shelley's famous novel.  Interestingly, it's also the form of Stoker's Dracula, a character paired with the monster in Hollywood in the century just past; and there are reasons Stoker revived what was already, at the end of the 19th century, an archaic form.  But if you're going to start a discussion of Shelley's gothic novel, you need to start with the narrator.

Or lack of one, actually.  The epistolary form doesn't have a single narrator, it has a series of them.  True to the form (and similar to Kierkegaard's Either/Or), the novel is told in diary entries and letters. The framing device is a letter about Dr. Frankenstein that explains the presence of his diaries which form the basic narrative of the novel.  There are narrators, but they are writing to themselves (the diaries) or to other characters in the novel (letters); no one is telling the story to an invisible audience of book readers.  That concept of story-telling would take time to gain a foothold.  The epistolary novel was an early way of gaining verisimilitude.

And Shelley needs that "willing suspension of disbelief" Coleridge wrote about in her novel.  There is, as Brogan says, very little science in it.  Then again, science was still nascent in the world, and even the basic scientific education we take for granted today (germ theory, atomic theory, genetic theory even) was unknown and certainly not widespread.  Of course, reviving a corpse is beyond science to this day, so there was no need of "hard science fiction" when Shelley wrote.  Dr. Frankenstein relies not on electricity and galvanic theory (the idea that electricity would restore the functions of life, or was even basic to them), but on more ancient knowledge:  alchemy.  This is actually in keeping with the Romanticism that was itself nascent but soon rampant in England and then across Europe and America.

What Shelley was going for, first and foremost, was a ghost story.  This was not a literary form in the early 1800's.  The great English ghost story writers wouldn't be along until the end of the century.  The Brothers Grimm were just assembling their "fairy tales" in Germany, Hans Christian Andersen was only 13 when Shelley's novel was published; the very idea of the "ghost story," much like the "fairy tale," wasn't even nascent in 1818.  We create anachronisms by ignoring history.

Shelley was creating what we would recognize later.  To even call Frankenstein an early effort at science fiction is to engage in anachronism.  Poe barely gets credit for that, and he was a prolific writer who experimented in genre, narrative form, poetic form, and everything else he could do for the sake of getting published.  Shelley was writing a scary story.  So the details of how the creature was animated, much like the details of how a ghost could come to haunt the characters in an M.R. James story, are irrelevant.  And really, the best comparison to Shelley's novel is not later stories about the dangers of science (which really became popular in the Cold War era as we grappled with the consequences of Hiroshima and nuclear proliferation); it is with the legend of Faust.

That's a deeper and older tale with relevance even today.  Faust was a scholar, the prototype of the modern scientist:  a person with singular knowledge, and such knowledge is power.  The difference between Faust and the modern stereotype of the mad scientist is that Faust only threatens his own soul.  His modern counterpart can pursue knowledge which could destroy humankind (the true "fallout" of the nuclear age; that our destruction at our own hands really is possible).  The latest version of this is on Netflix right now:  a movie called "Spectral," where an army of almost invisible humanoid creatures ravages an eastern European city and the U.S. soldiers who are there.  In the immortal words of Frank Zappa, "Bullets can't stop it, rockets can't stop it!  We may have to use nuclear force!"  It's that kind of plot line.  In the end, the cause is found:  weapons research which has created monsters even the creators can't control (shades of  Frankenstein!), but which can be stopped en masse by a simple imperative (of course).  Once again the desire to know runs amok, destroys basic humanity (what animates the creatures is the stuff of modern nightmare, human beings reduced to a central nervous system in a vat), and threatens to wipe out human existence.  At least Frankenstein's creature confines his murderous efforts to Frankenstein's family, and then banished himself from human contact in the Arctic.  Our modern scientific efforts create perfect weapons we stop only at great cost to others.  And if we don't do it, other species do:  think "Alien" and it's sequels, especially "Prometheus."*

Shelley didn't invent these fears; but she created a way for us to talk about them a century before we needed it.  It's worth asking: how did she know?

*The movie ends, as befits the "science in service of madness" genre, grimly.  The scientist who stops the monsters destroys as much of them as possible, to prevent anyone else going down this path.  Of course, the military/government goes in to capture as much information as possible, bent on creating the monsters they just destroyed at great cost.  The moral of the story?  Faust was a piker.  Our modern scientists create monsters with no humanity.  The irony of the Frankenstein tale is that the creature was more human than his creator; or at least a more sympathetic character.