“I know that you believe you understand what you think I said, 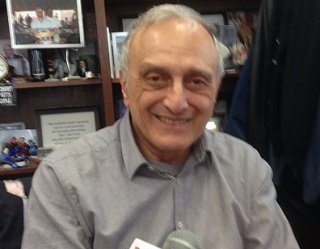 Does he look like a white racist to you?

"....but I'm not sure you realize that what you heard is not what I meant.”  McCloskey's version has the virtue of being clearer and more succinct than what follows,  although no one can deny Paladino said exactly what he meant on both occasions.

I am writing this during Christmastide.  I am setting it to post after Epiphany.  Some things don't deserve to further stain the season.

This matter requires a little attention.  It first came to my (and therefore public) attention here:

The Buffalo real estate developer who served as New York co-chair for Donald Trump’s campaign said his greatest hopes for 2017 are that President Barack Obama “dies” and that his wife Michelle is “set loose in the outback of Zimbabwe.”

True to form, Carl Paladino isn’t backing down from the deeply offensive comments he made to alt-weekly newspaper Artvoice for their year-end survey of 42 locals about their wish lists for the coming year.

“Of course I did,” he told the Buffalo News when asked for confirmation that he made the remarks about the president catching “mad cow disease after being caught having relations with a Herford” and Michelle Obama returning to “being a male.”

“Tell them all to go f*** themselves,” Paladino added in reference to the News’ editors who put in the request for confirmation. "Tell that Rod Watson I made that comment just for him," he continued, referring to a News editor who is black.*


Keep that in mind, especially the highlighted bits, because Carl Paladino is not a racist (all evidence to the contrary) and his remarks are not about race because it's never about race.  4 days after those comments went public, he decided he didn't want to stand behind them any longer:

I never intended to hurt the minority community who I spent years trying to help out of the cycle of poverty in our inner cities. To them I apologize. I thought about them every day as I fought against unqualified and incompetent superintendents, administrators, teachers and School Board members, unfair union contracts, broken homes and children who can't get the education they need to break that cycle of poverty because our school system is a failure, for reasons that needn't be. I have shown those who chose not to watch but to enter the arena how to fight the demons. Nevertheless, I won't be judged by those timid souls who sit unbloodied in the gallery always prepared to criticize.  Nor do I have any respect or regrets for the insane education activists who hover over and defend the dysfunction of the BPS.


I'm just going to enter comments as we proceed.  He insulted Michelle Obama and Back Obama.  To them, he doesn't apologize.  Keep it classy, Carl.  And notice he's the good guy here; the whole world is against him, and he's bloody but unbowed.  What a guy! And watch that last line; it turns out this whole affair is also the fault of the school district.  You can't make this stuff up.

I received your emailed survey at an emotional moment after I had just listened to Obama's statement that he regretted the slaughter in Aleppo that, in fact, resulted from his failed and cowardly foreign policy, a policy to look the other way while innocent people were murdered and starved.  I view Barak Obama as a traitor to American values. We don't stand down and leave soldiers to die on a battlefield when we can send help. We don't lie to the American people and the parents of our fallen to get re-elected.  Obama has not led America to a better place by disregarding the rule of law and standing with his elitist brethren as above the law nor has his wife Michele Obama who told our children and the world after the election that now "there is no hope for America."


Yeah, that's right!  He was upset about the news out of Aleppo!  Yeah, that's the ticket!  Oh, and Michelle is to blame, too, for disagreeing with Paladino's politics.  The nerve!

Your survey questions provided me with the spark to vent and write deprecating humor about a bad President for whom the main stream media continues to seek an undeserved legacy. I wanted to say something as sarcastic and hurtful as possible about the people so responsible for the hurt and suffering of so many others. I was wired up, primed to be human and make a mistake. I could not have made a worse choice in the words I used to express my feelings.


It wasn't Carl's fault; it was the survey questions that started it!  No, it was the media's fault for their reporting on Obama.  Thanks, Obama, for making Carl spew his bile in public!  I hope you're happy now!

It's all too easy to make mistakes when you're emotional about the rigged teachers’ contract by an incompetent Board of Education majority who sold out the school district as payback to teacher's union leader Phil Rumore for his election support. They couldn't care less about the children of Buffalo. And I'm bewildered about the Supreme Court Judge who tried to dismiss a lawsuit to recover $450 million fleeced from the children of Buffalo by LP Ciminelli during the $1.4 billion schools building project.


Or is it the school board's fault?  All we know is, Carl is only human, and a guy can only take so much!

I publicly took responsibility for what I said and confirmed those were my answers, but believe it or not, I did not mean to send those answers to Artvoice.  Not that it makes any difference because what I wrote was inappropriate under any circumstance.  I filled out the survey to send to a couple friends and forwarded it to them not realizing that I didn't hit “forward” I hit “reply.” All men make mistakes.


He took responsibility but he's not responsible and besides he only meant it as a joke among friends and besides it was inappropriate under any circumstance except the circumstance of telling the editors to "f*** themselves" and telling Rod Watson it was especially for him, and it was actually appropriate to say such things to his friends, and besides it was really the fault of the technology.  Who can be blamed when technology lets you down and does what you tell it to rather than what you later decided you meant it to do?  All men make mistakes, and no real man is ever responsible for the mistakes that reveal his true character to the nation and, more importantly, the school board he sits on.

What is horrible is explaining to my 17 year old daughter how her hero could be so stupid.


If she doesn't know who you are by now, Carl, the therapy sessions are gonna go on for decades.

What is horrible is watching my family and friends react to the rabid hordes of attacking parasites we now call activist progressives.


More horrible than finding out what a sick excuse for a civilized person you are?  That's hard to fathom.

It's been a sick, combative year for America. We changed the direction of our country and beat back the demons for a few decades. I am proud to have been a part of the making of history.


If this is your idea of "making history," then Lord help us all.

As for the vanquished progressive haters out there spewing their venom at anything that is a reminder of their humiliating defeat, irrelevance is tough to chew on.


Nothing irrelevant about racism, is there, Carl?  Proud of what you said now, are you?

For the mean spirited disoriented press trying to find grounding and recover legitimacy on my back, pray that you still have a job next year because you have lost all credibility with the people.


Except the people who don't believe this non-apology apology you have issued.  Although, admittedly, it may become a textbook example of the form some day.  So, in that sense, maybe you have been a part of the making of history.

No, I'm not leaving the school board, not when it's time to help implement the real choice elements of Trump's plan for education reform.  I've spent years dedicated to the mission to defeat the thought that the liberal progressive elitist establishment can continue to hold our minority children captive in the cycle of poverty simply to provide their voting base. I don't intend to yield to the fanatics among my adversaries.  I certainly am not a racist.


You certainly are a racist, though of course since you say you aren't, how can we think otherwise?  As for staying on the school board, that's not really your choice, I don't imagine.

I was explaining to a new crop of students the basic idea of Greek tragedy limned by Aristotle all those millennia ago.  The key element, I told them, was that the tragic hero had to accept responsibility for his mistakes, had to recognize the tragedy was his (well, Medea, her), fault.  If he didn't, he's just a gutless weasel suffering a series of unfortunate events.  The hero takes the blame for what he did so terribly wrong.

Carl can rest easy in the knowledge that, aside from his 17 year old daughter, no one is ever going to think of him as a hero.

Yes, I know, I haven't published it yet, but I can add this from the school board meeting about Mr. Paladino.

The board met to consider a fiery resolution that said if Paladino did not resign within 24 hours, they would petition New York Education Commissioner MaryEllen Elia to remove him. Elia has so far declined to weigh in on the controversy.

The resolution, introduced by board member Hope Jay, called Paladino’s remarks about the Obamas “unambiguously racist, morally repugnant, flagrantly disrespectful, inflammatory and inexcusable.” It also said they reflected negatively on “the Buffalo Board of Education, the City of Buffalo and its leadership and its citizens, the State of New York, and every decent human being in America and abroad who has been shocked and offended by his words.”

When Jay read her resolution Thursday at the school board’s special session, the crowd gave her an enthusiastic standing ovation.

Only two board members ― Patti Pierce and Larry Quinn, who are considered Paladino allies ― did not support the resolution. They said they would like to see Paladino apologize to the students of the district rather than resign.

Pierce said she hoped the people in Buffalo could show Paladino some forgiveness for his comments and “take a page out of the horrific massacre that happened in Charleston, South Carolina, where nine innocent people in a house of worship were slain by a hateful, hate-filled man.”

The comparison drew gasps from the audience and was too much for one woman, who left shouting that it was offensive to use the murdered African-American congregation members in this situation.


The Board voted 6-2 for him to leave.  I'm sure somehow this is Obama's fault.

*His comments were actually uglier than that summary might lead you to believe:

Artvoice: What would you most like to happen in 2017?

Paladino: Obama catches mad cow disease after being caught having relations with a Herford. He dies before his trial and is buried in a cow pasture next to Valerie Jarret, who died weeks prior, after being convicted of sedition and treason, when a Jihady [sic] cell mate mistook her for being a nice person and decapitated her.

Paladino: Michelle Obama. I’d like her to return to being a male and let loose in the outback of Zimbabwe where she lives comfortably in a cave with Maxie, the gorilla.