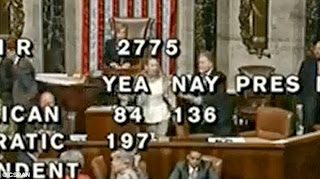 
I have a high regard for someone's expression of religious passion.  I don't discount the outbursts of pentecostal Christians any more than I do the religious visions of Julian of Norwich or Mother Teresa.  But, according to CNN, this is what Diane Foster Riedy said:

"Do not be deceived. God shall not be mocked. A House divided cannot stand," she said, according to a House GOP aide. After a few seconds, she was escorted out by the Sergeant-at-Arms, but an audio recording by Todd Zwillich of Public Radio International captured the rest of her rant.

According to her husband, she didn't say this:

“The big vote, the whole crew was there, and she just felt the Holy Spirit knows the time she was to go up,” he reports.


She told him that the words she had spoken were not her own, that she had just been the messenger.
“She said she didn’t know what she was going to say,” he reports. The only thing I have to say about it is:  the Holy Spirit isn't that incoherent.

My position on this will be a but unclear if I don't try to clarify it.  The prophets of the Hebrew Scriptures never spoke to an empty room, and they didn't speak out of isolated conviction.  Certainly the actions of Hosea seemed odd:  marrying a known prostitute and naming his children "Not Loved" and "Not my people."  The joke in seminary was that Ezekiel had found some mushrooms on the river banks of the Kebar.  It was the community that affirmed the prophetic voice of Ezekiel and Hosea and the other now-canonical prophets.  The visions of Ezekiel and the actions of Hosea may have seemed incoherent at the time, it is true; they were eventually evaluated by the community and found to be true and trustworthy.  So I do not leap to the conclusion that Diane Foster Riedy was merely reacting to a stressful situation.

But neither do I conclude she was a messenger for the Holy Spirit.  Reidy's conviction that she spoke for God is still rather isolated.  It may be her congregation will confirm her gifts; but even then, it doesn't mean all Christendom affirms it.  It's a sad, strange episode.  But it says more about the speaker than the one whom she claims to be speaking for.